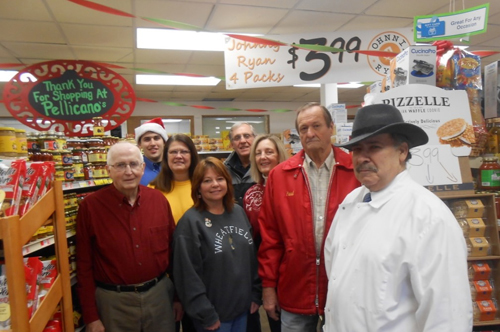 Christmas baskets for the needy

Co-chairpersons Ralph DeVantier and Art Kroening are working with the clergy of local Wheatfield churches to identify the needy families who will receive the Christmas food baskets. There will be 16 food baskets distributed this year, a much-needed increase from last Christmas according to organizers.

The Wheatfield Lions Club meets at its clubhouse located in the Five Senses Nature Park on Ward Road. The club carries out projects such as the White Cane to generate money to help people who need glasses or help in providing money for hearing aids. The Wheatfield Lions Club sponsors a free pancake breakfast for senior citizens in October, as well as a paid pancake breakfast in April. The Wheatfield Lions Club is the co-sponsor of the Citizenship Awards Dinner in May for fourth-, fifth- and sixth-graders in both public and parochial schools in the Niagara Wheatfield school district. The citizenship awards dinner was established by the co-sponsoring Town of Niagara Lions Club in the 1950s. The Citizenship Awards Dinner is attended by more than 300 people each year and is held at Niagara Wheatfield High School.

The Wheatfield Lions Club is always looking for new members. Call Lion President Bill Ross at 731-5949 if you are interested in attending a Lions Club meeting for possible membership.