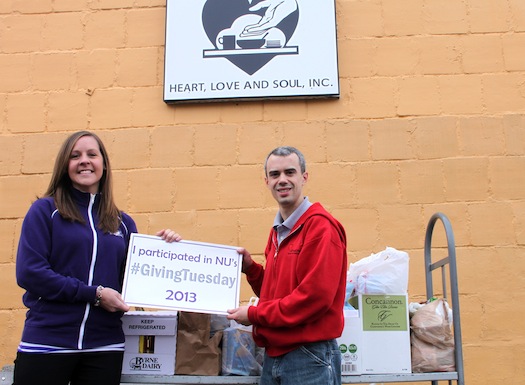 The week after Thanksgiving isn't just for shopping anymore.

Students, alumni and friends of Niagara University accumulated nearly $300 and more than 840 pounds of food and nonperishable goods on Dec. 3, the 2013 edition of #GivingTuesday.

#GivingTuesday started last year as a charitable answer to the retail shopping days of "Black Friday" and "Cyber Monday." This was the first time NU participated in #GivingTuesday.

The proceeds from Niagara's efforts were distributed evenly to the Heart, Love & Soul food pantry in Niagara Falls, the St. Vincent de Paul Society and Community Missions of Niagara Frontier, which also conducted its own collection in conjunction with the global movement.

"We are very grateful that your Christmas giving included a donation to Heart, Love & Soul," wrote Sister Beth Brosmer, the food pantry's executive director. "Your gift is a welcome contribution toward our ministry with the poor."

"Lending a helping hand to those in our community who are poor and underserved is one way we fulfill our mission as a Catholic and Vincentian university," said Jaclyn R. Rossi, '08, M.S.Ed.'10, NU's associate director for leadership giving. "With this being our first year involved with (#GivingTuesday), we weren't sure what to expect in terms of participation. But at the same time, we knew that our students and alumni are extremely eager to give back, and they certainly rose to the occasion. I would expect that this will become an annual event for us."

More than 10,000 organizations participated in #GivingTuesday, according to the cause's website, although NU and Community Missions of Niagara Frontier Inc. were the only nonprofits from Niagara County to join the effort.

#GivingTuesday was trending on Twitter for 10 consecutive hours Dec. 3, and the hashtag was used more than 700 times per minute. The cause was even blogged about on the White House's website.

Seeing an opportunity to channel the generous spirit of the holiday season to inspire action around charitable giving, a group of friends and partners, led by the 92nd Street Y in New York City, came together in 2012 to find ways to promote and celebrate the great American tradition of giving. The concept gained steam, and by bringing together a group of founding partners - including the United Nations Foundation, DonorsChoose.org, Iraq and Afghanistan Veterans of America, and Groupon - a nationwide series of discussions about how to make #GivingTuesday a success began.