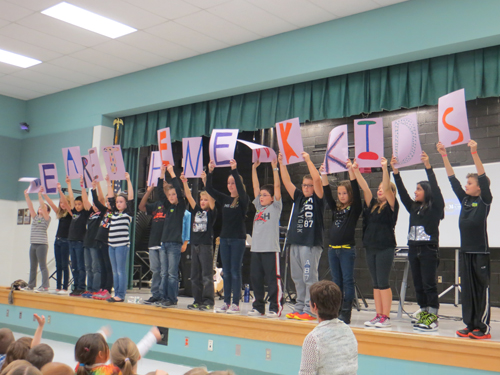 The 2013 K-Kids (Kiwanis Kids) of West Street Elementary School opened the first assembly at their school on Oct. 18. As each member introduced themselves on stage they articulated the "7 Habits of Highly Effective People," a book by Stephen R. Covey, a leadership/ take responsibility outline.

Each student raised a large letter and when all were held high, they spelled "WE ARE THE NEW K KIDS."

With the entire school population seated on the floor of the auditorium, kindergarten kids closest to the stage with fifth-graders toward the back of the room, Kevin McCarthy entered the stage to present an invigorating show emphasizing self respect, self control and respect for others.

As their initial project the K-Kids members wrote letters to our men and woman serving in the armed forces. They also established a school-wide collection of small toiletries to send along with the letters. The items will be delivered to the Niagara Falls Air Reserve Station to be delivered elsewhere.

The West St. K-Kids is a group of 17 fifth-graders that are taking on the responsibility and leadership of running their club as they plan and participate in community/school service projects. The West Street K-Kids is advised by counselor Lenore Palmeri and is sponsored by the Kiwanis Club of Niagara-Wheatfield.