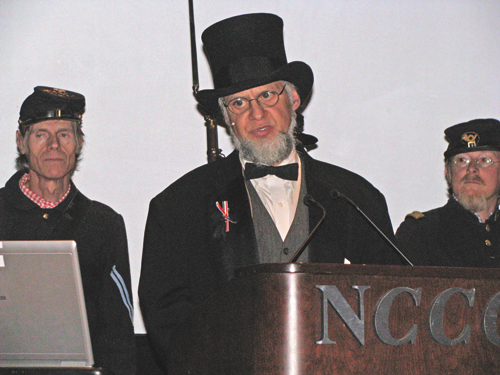 Gettysburg wasn't the only place celebrating the 150th anniversary of Abraham Lincoln's delivery of The Gettysburg Address on Tuesday.

Lincoln was not the main speaker of that cold, but sunny Nov. 19, 1863, day at the dedication of the new cemetery for those fallen during the three-day Battle of Gettysburg on July 1-3, 1863. That honor went to then-famous orator Edward Everett, former senator, secretary of state and president of Harvard, who spoke for two hours about the importance of the battle that left so many dead. Everett reportedly held the crowd spellbound with what was essentially the first full account of the battle, Emberton said.

Lincoln spoke for about two minutes and uttered only 272 words, she said, essentially stressing the importance of the nation and dedicating the cemetery in the name of human equality.

Quick! Quote just one phrase from Everett's speech. No one in the NCCC audience could do it.

Yet even schoolchildren are familiar with the words of Lincoln's speech, starting with "Four score and seven years ago our fathers brought forth..." and millions of people from across the world have read it on the walls of the Lincoln Memorial in Washington, D.C.

Emberton called it "one of, if not the most important speeches in American history."

At the time, however, there were mixed reviews of Lincoln's speech, Emberton said.

The current Patriot News editorial board wrote this month: "Seven score and 10 years ago, the forefathers of this media institution brought forth to its audience a judgment so flawed, so tainted by hubris, so lacking in the perspective history would bring, that it cannot remain unaddressed in our archives..." The board's comments ended with the retraction: "In the editorial about President Abraham Lincoln's speech delivered Nov. 19, 1863, in Gettysburg, the Patriot & Union failed to recognize its momentous importance, timeless eloquence, and lasting significance. The Patriot-News regrets the error.

Dr. Nicole Bishop of NCCC pointed out that "there's a lot students of today could learn about writing" from The Gettysburg Address in this "world of soundbites." Even in such a short speech, Lincoln used the word "we" 10 times. Also used several times were "dedicate" and "nation."

NCCC student Anthony Garza said that, "As a veteran, I've been on the butt end of many speeches." He is impressed by Lincoln's words about being "engaged in a great civil war, testing whether that nation, or any nation so conceived and so dedicated can long endure."

Before Emberton's speech, Nancy Knechtel of NCCC set the scene for those attending the commemoration with "Visualizing Gettysburg," a slide presentation of available photos and engravings showing Lincoln, the aftermath of the battle and that long ago dedication of Gettysburg National Cemetery.

She noted that most photographic images of Lincoln tend to be slightly out of focus. Photography of that time required the subject to stand perfectly still for a period of time. Since Lincoln was so tall, he tended to sway a bit.

Lincoln also didn't feel well the day of the cemetery dedication, she said, and his fever might have been a mild form of smallpox.

Emberton said the cemetery was built because the bodies of the men and horses killed in that July battle caused such a stench that they were hastily and mostly shallowly buried, and thus were being rooted up by pigs and dogs.

Steeped in history, the audience started leaving the NCCC auditorium after the program ended. However, one young student seemed not to have received the message. "Text me!" she called to a friend.