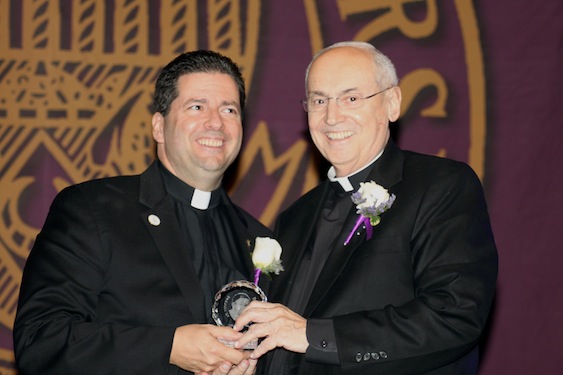 Niagara University presented awards to the fourth-longest tenured president in the institution's proud history and the second-largest hospital system in Western New York during its annual President's Scholarship Dinner Saturday at the Seneca Niagara Casino Hotel and Event Center.

"In the book of Genesis, the very story of our creation tells us that God breathed life into man and women to create human life. Tonight, as we reflect on Niagara University, we, too, recognize that divine life, which has been breathed into us, (and) the life, legacy and the spirit of St. Vincent de Paul, who bent his life to the pattern of Jesus Christ and breathed God's very spirit into those he encountered," stated the Rev. James J. Maher, C.M., Niagara president. "Niagara University was created and is sustained by that very same spirit of St. Vincent, seeking to breathe the life of God into others and serving with compassion and excellence."

Levesque served as NU's president for 13 years (2000-13). Under his leadership, Niagara experienced a continuous process of transformation that significantly developed the physical character of the university's campus and its 21st century approach to teaching and learning. Close to $100 million was invested in new construction, renovation and improvement projects at NU during Levesque's presidency.

When Levesque announced in January that he would be stepping aside as president of Niagara University, the institution's board of trustees granted him the esteemed title of president emeritus. Four months later, it was announced that NU's Institute for Civic Engagement would be renamed the Rev. Joseph L. Levesque, C.M., Institute for Civic Engagement to honor his commitment to the community.

Levesque is currently serving as interim president of St. John's University while it conducts a national search for its next president.

Catholic Health was formed in 1998, when, at the urging of Bishop Henry J. Mansell, several hospitals, nursing homes and clinics operated by religious orders, Catholic Charities and the Diocese of Buffalo came together under one organization.

Under the organizational umbrella of Catholic Health for the past 15 years, Sisters of Charity Hospital, Mercy Hospital, St. Vincent's of Dunkirk, Father Baker Manor, the Our Lady of Victory Senior Neighborhood, and many other facilities in Western New York have provided care for every stage of life.

Kelly G. Besaw, who recently completed an eight-year term as a member of Niagara University's board of advisers, and his wife, Kim, served as the dinner's chair couple. The Besaws received undergraduate degrees from Niagara University in 1983.

Maryalice Demler, a member of Niagara University's Class of 1986 and anchor at WGRZ-TV Channel 2, was the mistress of ceremonies. NU junior Kyle Baran performed the American and Canadian national anthems, while guests were treated to a rendition of "Astonishing" by sophomore Marina Laurendi. Senior Michael Sheridan provided accompaniment to both students.