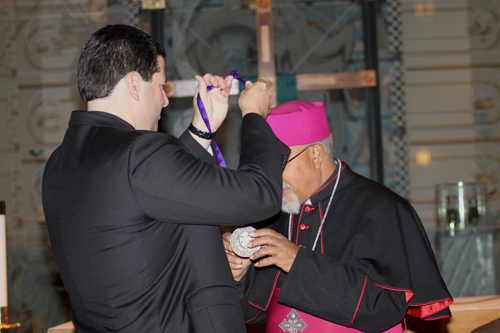 The Most Rev. Abune Berhaneyesus D. Souraphiel, C.M., archbishop of Ethiopia, spent most of Tuesday on the campus of Niagara University.

During his time on Monteagle Ridge, Archbishop Souraphiel met with the Rev. James J. Maher, C.M., NU president, as well as several other individuals from the university community, including administrators, faculty and students.

In the afternoon, the native Ethiopian presided over Mass, was presented with Niagara University's highest honor, its President's Medal, and also offered remarks on the state of the Catholic Church in his home country.

"It was an honor for the Niagara University community to welcome Archbishop Souraphiel, C.M., to our campus and Western New York," Maher said. "We embrace Archbishop Souraphiel in his role as a leader of the Roman Catholic Church and member of the Vincentian family. He represents a living witness to St. Vincent de Paul, transforming the church, the world and serving the people of Africa in his ministry though this witness to the gospel of Jesus Christ."