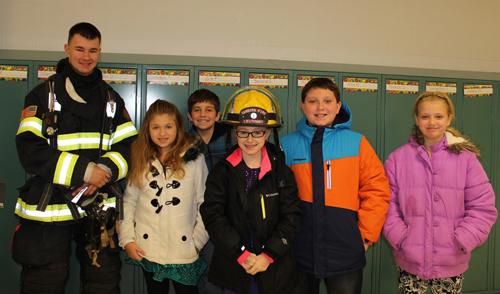 Students and staff at Niagara Wheatfield's West Street Elementary School had a visit from the Sanborn Volunteer Fire Department in honor of Fire Prevention Week.

Fire Prevention Week has been in existence since 1922 when it was established to commemorate the Great Chicago Fire of 1871, a two-day long fire that occurred on Oct. 8 and 9 of that year and resulted in the deaths of more than 250 people.

Firefighters Rob Hoover, Nate Daigler and Fred Blank came to the school with a fire engine and a hook and ladder truck. They spent time in each of the school's pods talking to students about fire safety and introducing themselves, so that students are familiar with the fire personnel who are in the community to protect them. They talked to the students about if their families had an escape plan in the event of a fire, the importance of changing batteries in smoke and carbon monoxide detectors and safety tips if they had a fire in their house. Hoover told the students to never re-enter a burning house once they got out of it and that fire personnel would go in and get the rest of their family or pets out. He also told them the same thing goes for a fire at the school, that nothing was more important than their lives.

Following the lecture, the students were ushered outside to look at the fire trucks up close and ask questions to Blank. He told them how the hook and ladder cost the company $1.5 million, but it was worth every penny if it saved just one life.

"I love the students' enthusiasm and questions," he said. "You never know if they might be inspired to become a firefighter or an EMT some day."

Heidi Aquino, who works at the school, said they are very grateful to the Sanborn and Lewiston fire companies. "They come out every year and talk to the students and give them tips on how to react during a fire. The Lewiston fire department dropped off coloring books and hats for the students, too. They are very good to us."