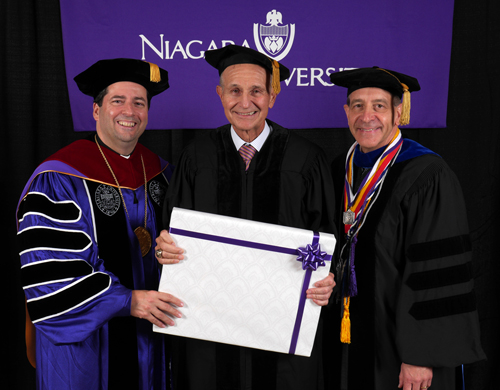 Niagara University's College of Hospitality and Tourism Management held its 13th annual convocation Tuesday, Oct. 22, in the university's Alumni Chapel. Sponsored by the Maid of the Mist Corp., the convocation is the college's showcase event, during which it annually honors national and international leaders in the hospitality and tourism industry.

"I thank Jeremy, Carsten and Danilo for allowing Niagara University the privilege of honoring them; they are incredibly accomplished men," said the Rev. James J. Maher, C.M., Niagara University president. "If you listened closely to their life stories, you heard some common themes: humble beginnings, overcoming significant life challenges, and a pledge to excellence. They are each lifelong learners with an abiding commitment to service to their local and global communities. They honor us with their presence today."

Jacobs, who received an honorary doctor of commercial science, assumed ownership of Delaware North at age 28, helping transform the company from a modest popcorn and peanuts vending business in Buffalo into one of the world's leading hospitality and food service companies. The seven operating divisions that make up the Delaware North family of companies are responsible for more than $2.6 billion in annual revenue and employ 55,000-plus associates. Locally, Delaware North operates businesses in Niagara Falls State Park, First Niagara Center and at Ralph Wilson Stadium, among others. Philanthropically, the Jacobs family has supported numerous causes, ranging from educational scholarships to environmental preserves and youth sports. Last year, the Jacobs family was named "Philanthropists of the Year" by two separate organizations.

At age 47, Rath, recipient of NU's International Hotel Developer Award, is already among the most accomplished entrepreneurs the hospitality industry has ever seen. In November 2003, he was named managing director of Robinson Club GmbH, Germany's leader in premium resort vacations. Two years later, Rath became board chairman of the Arabella Hotel Holding International and Arabella Starwood Hotels & Resorts. He is also a board member of Design Hotels. As founder and CEO of Lifestyle Hospitality and Entertainment Management AG, he oversaw construction of the futuristic Kameha Grand Bonn, a German resort that has received countless awards for design and innovation. Rath also maintains a lucrative career as a motivational speaker and lectures at the International University of Applied Sciences in Bad Honnef, Germany.

The International Hotelier of the Year Award went to Zucchetti, a graduate of the Hosta Hotel & Tourism School and the highly regarded Hotel Institute in Montreux. Zucchetti was named general manager of Villa d'Este in 2005. By January 2012, he took over as managing director of the Villa d'Este Group, succeeding the legendary Jean-Marc Droulers. Zucchetti has been instrumental in placing dozens of NU students in summer internships in Lake Como over the past 10 years. In 2012, Virtuoso Travel Week named Zucchetti its Hotelier of the Year, an honor given to those who exemplify a commitment to delivering exceptional experiences for clients.

For more information on Niagara University's College of Hospitality and Tourism Management, call 716-286-8279 or go online to www.niagara.edu/hospitality.