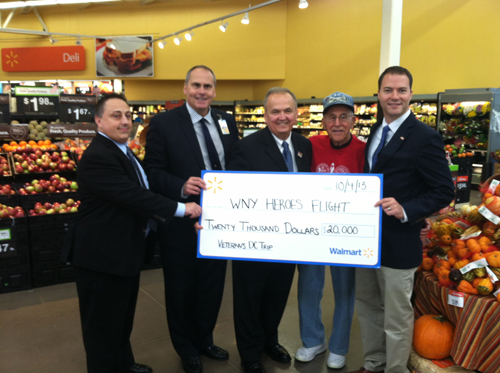 State Sen. George Maziarz will be taking a group of veterans to Washington, D.C., on Wednesday, Oct. 16, on a WNY Heroes flight.

A spokesperson at his office said this week, that the trip was on despite government shutdown. If the shutdown continues next week, the senator is working on special arrangements for the veterans to visit the monuments, especially the World War II memorial. Taking the trip this year are 29 veterans, most from World War II, but also six Korean War veterans.

The one-day trip is being sponsored by Maziarz, Walmart and the Niagara USA Chamber.

Walmart Stores Inc. presentation of a $20,000 grant to the Heroes Flight took place in a ceremony last week at the new Walmart store at 866 Niagara Falls Blvd., North Tonawanda.

This latest trip is the fifth Maziarz has sponsored.

"Veterans across Western New York and throughout the country have sacrificed so much for our nation's freedom," said Maziarz. "While we could never fully repay them for their bravery, this trip will allow them an opportunity to see the nation's capital and the monuments honoring them. I want to thank the Walmart corporation for their extreme commitment and dedication to our nation's heroes. Without their funding, this trip would not be possible and some of the veterans would never have an opportunity to see the memorial."