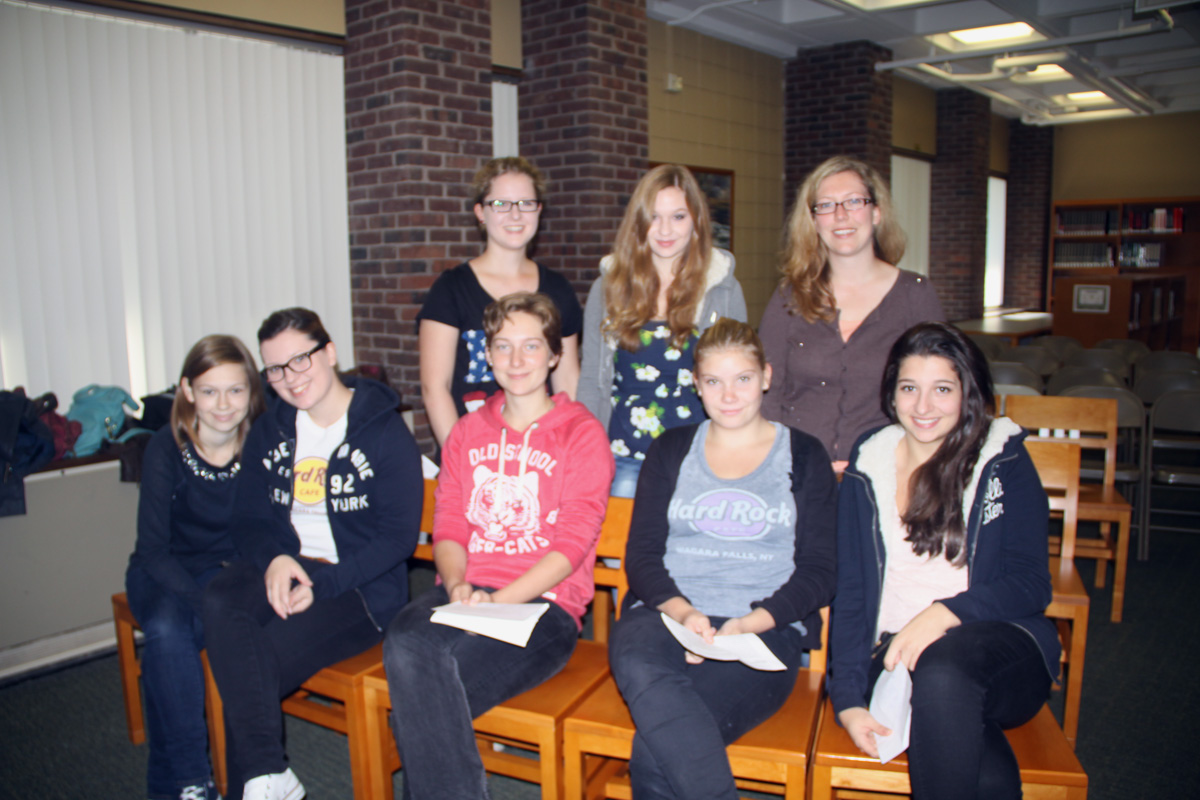 Photo and story by Janet Schultz

One student gave the answer most of us were thinking, beer and pretzels.

Well Lew-Port students soon learned that Germany is much more than beer and pretzels.

Eight students and their teacher from Lübeck, Germany spent two weeks at Lewiston-Porter and traveling around the East coast.

They came from Ernestinenschule, Lübeck, just north of Hamburg, Germany. As part of their 13th year of school, senior year for their Lew-Port counterparts and enrolled in a foreign language track, they came to Lewiston to learn our culture, language and learn more about the U.S.

In return, Lew-Port students learn about the lives of their counterparts from another country.

"We are preparing our students for the next step along the way in their life journey," explained Lew-Port Principal Paul Casseri. "The relationship between our two schools really sets the stage for what we hope will be continued communication between students and their hosts. Who knows what opportunities may arise as we move into the future."

Part of the exchange is a Town Hall meeting where Lew-Port students ask questions and learn about the German students, and vice versa.

These students come from Lübeck, a city of about 12,000 people founded in 1143 and at one time the capital of the Hanseatic League, a commercial and defensive confederation of merchant guilds. Their school, which has 770 students, was once a girls-only school and several years ago became co-ed.

In Germany, students select their career track early on. They begin school at age 3, 4, or 5 in kindergarten, moving on to grundschule (grades 1 to 4). Following graduation from grundschule, the teachers suggest to the parents what type of school their child should attend.

At the end of fifth grade students are made aware of which school they will attend depending on their mark and career choice including hauptschule, realschule or gymnasium.

Hauptschule prepares students for a vocational education and they can graduate at grade 9.

Realschule is the middle level and they can graduate after grade 10.

Gymnasium is the higher level and prepares students for the university and goes to grade 13 (our grade 12).

"Most students go to grade 13 and then on to university," said Hoyer.

"Education in Germany takes a long time," she continued.

A typical day begins at 8 a.m. and includes 60-minute periods with a 45-minute lunch, ending at 4:30 p.m. While in the states every day is the same with a few changes, each of their days is different.

All students take German and English from elementary school on and add other languages as they move up. They also take biology, mathematics, social studies and religion/philosophy.

There are extracurricular activities and usually the clubs reflect the curriculum a student is following. In addition they also do charitable work, most recently fundraising and sending supplies to Africa.

Trips are a big part of the German education with one in fifth grade that allows them to get to know each other as they travel about 30 minutes away for two to three days.

Another trip to a lake in the seventh grade is where they learn to sail.

In 10th grade, they make an exchange to another country closer to Germany for two weeks, living with a host family, and in 12th grade they are given the opportunity to travel abroad to a place like Lewiston-Porter for a two-to-three-week exchange and live with host families.

Their sports activities include two periods a week where they play basketball, volleyball, football, high jump, and javelin. Ernestinenschule has soccer, handball and swim teams.

These guests found pizza, pasta and kabobs to be their favorite foods and enjoyed their short day trip to New York City.

"It's a fascinating place and it was nice to be there after seeing so many pictures of it," said Clara Biblow.

"We went to the financial center, China Town, Statue of Liberty, World Trade Center Memorial and Little Italy," she continued.

The girls found the biggest difference between Lew-Port and their school is that German teachers are stricter.

"You can't eat in class, but you can drink; you aren't allowed to have your phone in your hand," said Laura Beesel. "You will have it taken away and it is given back the next day after your parents were notified."

The other difference was our travel to shopping and entertainment usually takes about 30 minutes by car. In Germany they use their bicycles.

"I ride my bike everywhere," said one student.

However, they did see a German similarity in the Village of Lewiston with its quaint little shops and restaurants and being a small village.

We say "auf wiedersehen" to this great group of young ladies as Lew-Port welcomes another group of exchange students coming from France.