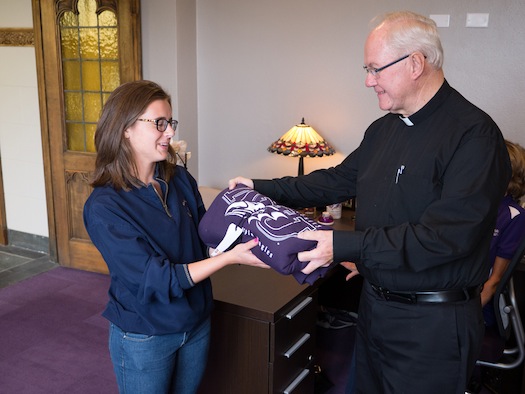 Taylor Lewand, a high school senior from Pittsburgh, met with Niagara representatives in the former Meade Hall, located on the southwest edge of campus, near the intersection of Hyde Park Boulevard and the Robert Moses Parkway. The facility served as the residence of the university's Vincentian priests and brothers for more than 80 years before a new home was constructed for the community in 2008.

To commemorate the occasion, Lewand was presented with a Niagara University blanket by the Rev. John Gouldrick, C.M., associate vice president for mission, whose office is now located on the building's first floor (pictured).

In February 2012, William Gacioch, a 1961 Niagara University graduate, and his family pledged a $2 million gift toward the renovation of Meade Hall. The gift from the Gacioch family was part of Niagara University's $80 million capital campaign, "The Promise of Niagara...The next 150 years," which was completed in April 2012.

The Gacioch Family Alumni and Admissions Center will be a mission-critical facility for Niagara University. Through the development of the Gacioch Center, prospective students and their families will have the opportunity to learn the strengths of the academic programs and feel the heritage of Niagara alive in the building.

Work was undertaken on the Gacioch Family Alumni and Admissions Center during the summer, with Niagara's offices of admissions, communications and institutional advancement incrementally relocating there this fall.