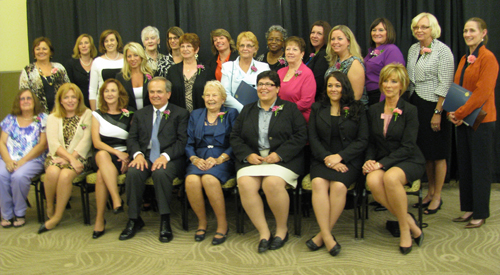 Women were in charge Tuesday evening at the Conference Center Niagara Falls, and they performed brilliantly.

The YWCA of Niagara held its "Tribute to Women" and presented its 2013 Niagara Awards to 25 local women and one man.

The Tribute to Women program listed each female nominee by residence, employer, awards/honors, community organizations/volunteer work, plus the nominee's advice to young women, showcasing the wealth of talent, caring and involvement available from Niagara County's women.

Of the 25 female nominees, eight were chosen for special recognition.

Youngstown resident Joanne Basta, Ph.D., was thrilled to receive the Education Award. She said it represents the community saying, "we value teachers," despite recent budget problems.

"To me it validates what I've done for 27 years," said Basta, who is a math teacher at Niagara-Wheatfield's Edward Town Middle School and an adjunct professor at Niagara University.

Even though the awards ceremony lasted late into the evening and was followed by lengthy picture taking and congratulations, Basta planned to be up at 5 a.m. the next morning as usual.

"There's so many of us who show up every morning and do what we can for kids," she said.

Her advice to young women was, "You are not a leader because you have the title. You are a leader when others follow you. Be worth following. And, remember - there is never a right time to do the wrong thing."

Elizabeth L. Phillips, formerly of Lockport, received the 2013 Lifetime Achievement Award. Now in her 90s, the veteran of some 75 years of volunteering said the award was a highlight of her life and joked that "I told my children they had to come to this tonight, and I didn't care if they came to my funeral."

Her advice to young women was, "Participate and enjoy the goodness of life wherever you are."

State Sen. George Maziarz, the lone male recognized, received a new award added to recognize a community member who has been an unsung hero to the YWCA - the 2013 Friend of the YWCA of Niagara Award.

Maziarz has been a longtime supporter of the YWCA and was involved in the creation of Carolyn's House in Niagara Falls.

Proceeds from the Niagara Awards will help sustain Carolyn's House, a 19-apartment residence for women and children who are rebuilding their lives, and other YWCA programs.

Maziarz contrasted the first time he walked into Carolyn's House, when it was a vacant building filled with peeling paint and debris, to what it has become today.

"I am dedicated to you and your efforts," he told the YWCA board members, adding that he receives daily advice from three women right at home. "Most of the advice is unsolicited, but they give it to me anyway."

Other women recognized as nominees included: