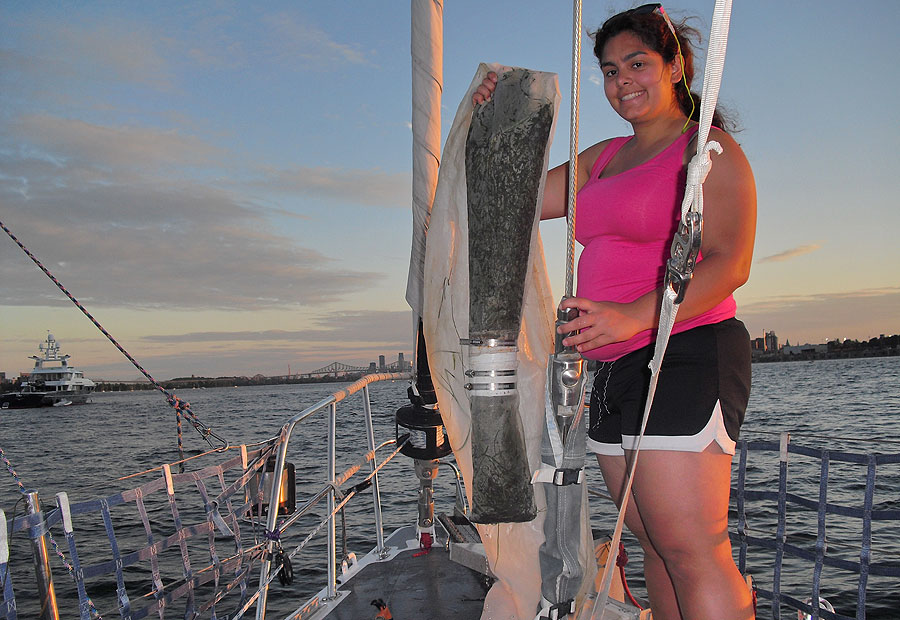 When Andrea Martinez opts for the can of juice instead of the plastic bottle at the store, it's apparent that the research she performed on pollution in Lake Ontario has had an effect on her.

She refuses to eat on Styrofoam plates, and whenever a cashier gives her a plastic bag, her head fills with images of fish with more plastic in their stomachs than food. The pollution of plastics in the water is a problem that Martinez, a senior electrical engineering major at the University at Buffalo, simply couldn't ignore.

Along with Shayne McKay, a senior mechanical engineering major, and Paul Glenn, a senior mathematical physics major, Martinez participated in what organizers say is the first survey for plastic pollution within the open waters of the Great Lakes.

Led by Sherri Mason, associate professor of chemistry at Fredonia State University, the students searched for the concentration and types of plastics in the water, and the effects the materials have on the ecosystem.

The study was part of a seven-day-long environmental research and communications course provided by Pangaea Explorations, an organization dedicated to marine exploration, education and conservation.

Samples are collected using a manta-trawl, which receives its name for its resemblance to a manta ray when in the water. The trawl uses two metal fins to remain steady above the water surface, and a mouth to funnel water into a net that catches material on the micron scale.

From Montreal, Quebec, the group boarded the Sea Dragon, the program's 72-foot-long yacht, and journeyed down the St. Lawrence Seaway, through the Thousand Islands - a chain of 1,864 islands that straddle the Canada-U.S. border - and across Lake Ontario to Toronto.

The UB students lived on the boat for seven days among a crew of 11, learning sailing terminology and deckhand duties, such as how to raise a sail. With McKay at the helm, the Sea Dragon even reached its top speed for the week at 9.7 knots.

Although none of the students had sailing experience prior to castoff, each received an international certificate of competency from International Yacht Training Worldwide by the end of the course, certifying them as qualified deckhands.

Their participation in the course was funded through the SUNY Louis Stokes Alliance for Minority Participation, a program dedicated to increasing the number of students from historically underrepresented groups completing degrees in the science, technology, engineering and mathematics (STEM) fields.

Capt. Eric Ross teaches a sailing class about buoys aboard the Sea Dragon. At the end of their journey, students receive an international certificate of competency for their maritime training.

"The trip aboard the Sea Dragon provided our students with a once-in-a-lifetime experience to build character, broaden their knowledge about the environment, and gain a global perspective," said Letitia Thomas, assistant vice provost and director of UB STEM programs. "We know our students are brilliant engineers and scientists, but we also want them to develop as people and become the next generation of leaders within STEM and beyond."

The rare opportunity allowed the UB students to witness firsthand the shocking effects of pollution in the water.

On Sugar Island, one of the Thousand Islands, the group sampled water from two locations that were 20 feet apart, one adjacent to an area of land inhabited by people and the other not. Despite the short distance, they found drastic differences between each site's water pH, temperature, quality and wildlife.

While not naïve enough to believe that people don't litter, Martinez couldn't understand why there was so much plastic in the water when the material is recyclable.

She soon learned that plastic is not biodegradable. The material is, however, subject to photodegradation, and breaks into smaller pieces due to light from the sun.

Microplastics, defined as smaller than 5 millimeters, are not only toxic, but can be mistaken for food by birds or fish. Eating the small bits of debris can lead the animals to believe they are full, when in reality they are malnourished or dehydrated. It could even cause them to suffocate.

And because most animals can't digest plastic, garbage eaten by fish or birds remains in their bodies long after the animal dies. People could also catch and consume animals filled with the plastics.

The students realize they can't avoid plastic altogether, but each has worked to lower their use of material.

Glenn replaced his plastic Tupperware sets with tin containers, which are more easily recycled than plastic. McKay no longer drinks bottled beverages, and asks for paper bags at stores. And Martinez has drafted a letter asking her employer to offer alternatives to the plastic cups and Styrofoam plates used in the food lounge.

"We're all humans and we share this Earth; it's everyone's problem," Martinez said. "People should view this issue as 'something I could help solve,' as opposed to, 'something that's too big for me.' "