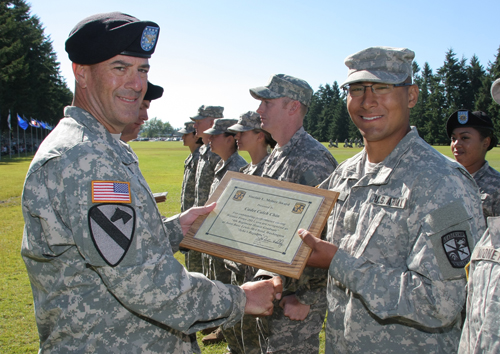 Niagara University ROTC cadet Caleb Chin earned the No. 2 ranking among approximately 500 of his peers during a 29-day, leadership-infused training program designed to provide young men and women with the skills to become effective military leaders.

Meanwhile, NU classmate Kit Burdick was ranked second in his LDAC platoon, which consisted of 46 cadets.

The announcements were made during a July 15 graduation and commissioning ceremony for members of the 3rd and 4th ROTC regiments who completed the 2013 Leader Development and Assessment Course.

During the ceremony, eight cadets were honored for individual accomplishments that set them apart from their peers. From each regiment, awards were distributed for distinguished honor graduate, honor graduate, the top male and female Army physical fitness test scores and the cadet that best represented the Warrior Ethos, a term coined to reflect the embodiment of a soldier.

Chin, a senior criminal justice major at NU and honor graduate in the ROTC 4th regiment, was one of the eight cadets recognized for outstanding leadership, physical fitness and navigation skills.

The LDAC, also known as Operation Warrior Forge, is held annually at Joint Base Lewis-McChord, Wash. LDAC is the U.S. Army Cadet Command's capstone training event and assesses cadets typically between their junior and senior years of college. The purpose of the course is to train U.S. Army ROTC Cadets to Army standards, to develop their leadership skills and to evaluate their officer potential.

Successful completion of LDAC is a prerequisite to becoming an Army officer through ROTC.

The leadership course is one of the final steps for cadets prior to completing the ROTC program and entering the Army as commissioned officers. Cadets that were not commissioned during the ceremony are scheduled to return to their ROTC programs to finish out the commissioning requirements.

Chin is an Albany native while Burdick, also an NU senior, is from Oswego.

"We are extremely proud of cadets Chin and Burdick for the way that they represented the Purple Eagle Battalion during their time in Washington," said Lt. Col. Paul Dansereau, professor of military science.