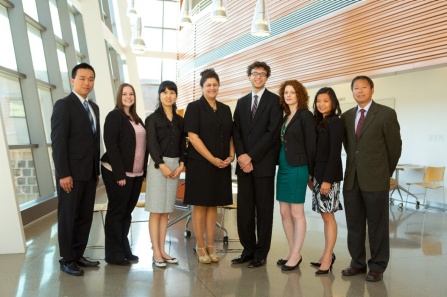 A team of doctoral students in UB's School of Engineering and Applied Sciences have designed a mobile app that aims to reduce avoidable hospital readmissions. The team is, from left to right, Dapeng Cao, Nicolette McGeorge, Yuan Zhou, Sabrina Casucci, David LaVergne, Judith Tiferes-Wang and Theresa Guarrera. Also pictured is Professor Li Lin, an adviser on the project.

Listen to your mother.

The age-old advice helps explain why seven University at Buffalo doctoral candidates, at the request of Rep. Chris Collins, R-Clarence, will speak to members of Congress about an award-winning smartphone app they are developing.

Dubbed "Discharge Roadmap," the app is a mobile platform designed to help patients and their caregivers more effectively navigate the health care system upon being discharged from a hospital. While still a work in progress, it could help reduce avoidable hospital readmissions, which cost Medicare more than $17 billion annually, according to the Centers for Medicare and Medicaid Services.

Sabrina Casucci, leader of the UB team, realized such an app was needed after talking to her mother, who, as the caregiver for two elderly family members, found the hospital discharge system inefficient and time-consuming.

"My mom really struggled navigating the health care system. And I know she isn't the only one," said Casucci, who will travel to the District of Columbia with Dapeng Cao, Theresa Guarrera, David LaVergne, Nicolette McGeorge, Judith Tiferes-Wang and Yuan Zhou.

All are Ph.D. candidates in industrial and systems engineering, a department of the School of Engineering and Applied Sciences, who study health systems and how people interact with computers.

Their work caught the attention of Collins, who has long advocated for government reform, particularly ways to curb unnecessary spending. Discharge Roadmap's promise, combined with the team's entrepreneurial zeal, led the congressman to invite the team to appear before the House of Representatives' Small Business Subcommittee on Health and Technology, of which Collins serves as chairman, on June 27.

"Unnecessary hospital readmission is a major problem for patients, caregivers and federal taxpayers," Collins said. "The UB team is an example of how entrepreneurs are changing and improving health care through innovations in mobile medical applications or apps. I am proud the talent of these UB students will be on display in Washington and I look forward to welcoming them to subcommittee hearing."

The UB team is expected to be one of several groups testifying before the subcommittee, which examines how health care policies inhibit or promote economic growth and job creation by small businesses. The students will give a brief overview of Discharge Roadmap and then show the subcommittee members how it would work. A Q-and-A session will follow.

The team began work on Discharge Roadmap in November after GE Healthcare, in partnership with Ochsner Health System, launched a contest calling for apps that improve patient and family experiences during hospital visits.

Students focused on readmission rates because studies show that poor communication between hospitals, patients (especially elderly patients) and their post-hospital caregivers too often result in patients being readmitted for the same condition within 30 days of their initial discharge.

"This is a nationwide problem that hospitals are working to remedy," said Li Lin, UB professor of industrial and systems engineering and an adviser to the team. "Discharge Roadmap and similar tools could potentially help save billions of dollars annually in avoidable health care costs."

The app would give users access via their smartphone to post-hospital care instructions, educational materials and other important information. It could also be used to coordinate plans between doctors, the patient, and their caretaker.

The idea impressed the competition's judges, who awarded the team second prize and $25,000. Emboldened by their success, the team continues to refine Discharge Roadmap with the possibility of launching it as a commercial product.