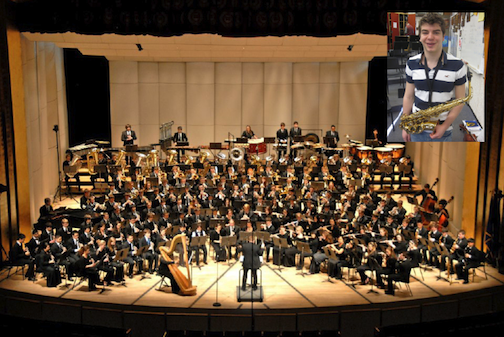 Collin Kemeny, inset, a senior alto saxophone student at Lewiston-Porter High School, was honored with a seat in the 2013 All-Eastern Band. The All-Eastern Honors Ensembles are sponsored by the National Association for Music Education, and bring together 780 of the most musically talented high school students in the eastern region of the U.S.

The NAfME All-Eastern honors ensembles, consisting of a concert band, symphony orchestra, mixed chorus, treble chorus and jazz ensemble. After three days of intensive rehearsals under the baton of eminent conductors, all of the ensembles were performed Sunday, April 7,at the Bushnell Center for the Performing Arts in Hartford, Conn. Kemeny was one of three students from Niagara County invited to participate, and the first ever from Lewiston-Porter.

Kemeny plays alto saxophone and oboe at Lew-Port. He has performed with the Niagara All-County Band, Zone 1 Area All-State Band, and the Conference All-State Band. In addition to performing, Kemeny has been actively composing new music since middle school. He has written pieces for the string orchestra, chamber ensembles, concert band, and full orchestra.

Over the summer, he had the remarkable opportunity to study composition at the Interlochen Summer Music Institute in Michigan. Last year, the Lew-Port High School Concert Band performed one of his pieces. This year, the Lew-Port High School Symphony Orchestra will premier one of his most recent compositions. On April 29, the Erie County Wind Ensemble will play Kemeny's music at its spring concert.

Outside of music, Kemeny is an accomplished athlete and has earned many honors for outstanding academic achievement. He plans to attend Case Western Reserve University and the Cleveland Institute of Music to major in mechanical engineering and music composition.