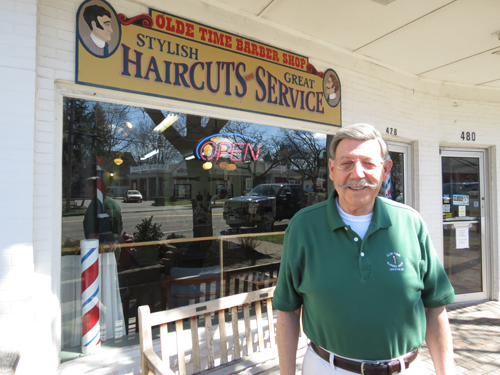 Village of Lewiston Mayor Terry Collesano celebrated his 13th anniversary at Olde Time Barber Shop on Wednesday. As his son, Chris, cut a customer's hair, the longtime barber reminisced about his time behind the chair.

"I did my first haircut when I was 7 years old, in my father's shop," he said. "Of course, I had to bring the kid back. Actually the father brought the kid back. My father had to straighten the haircut out."

Collesano obtained his license to barber after receiving training in Buffalo in 1957. He took a sabbatical during the '60s "when everybody let their hair grow long. The barbering business just dropped down to nothing," he said.

After two decades, Collesano returned to barbering and, in 1999, he took over 478 Center St.

Collesano said he gladly chose to take up the family practice.

"I love barbering," he said. "The main thing is you get to meet the public. You get to talk to everybody. I love to talk to everybody. Plus, being mayor of the village and, prior to that being trustee, you get to feel the pulse of the village - what's going on, and what the true feelings are with the public - and that's great to be able to work the two out in harmony. Yeah, I love it. I love barbering. I just like talking to people, and I love my trade, too." (photo by Joshua Maloni)