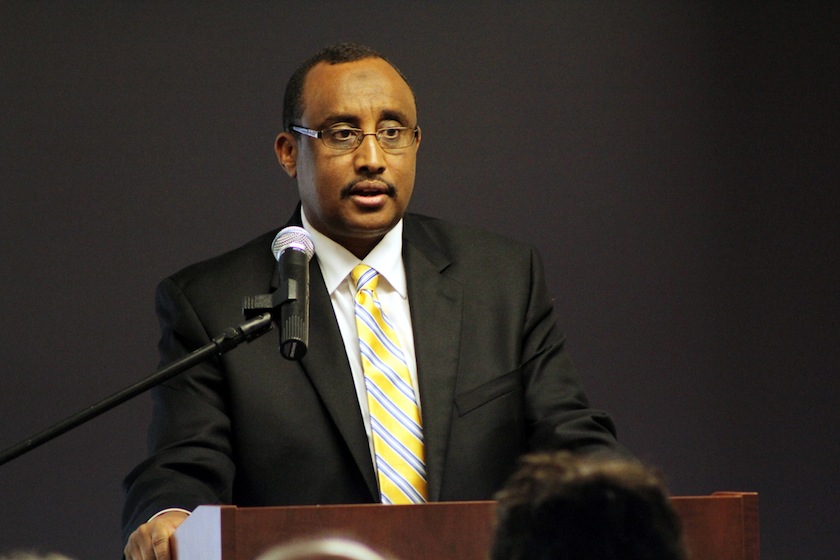 Dr. Abdiweli Ali, the Niagara University economics professor turned Somali prime minster, will reflect on his time as the leader of the impoverished, war-torn East African nation during a special event on April 22 at 6:30 p.m. in the Castellani Art Museum.

"Building a New Somalia: Reflections from the Former Prime Minister, Dr. Abdiweli Ali" will include a presentation from Ali, as well as a panel discussion featuring:

In November 2010, Ali took a sabbatical from his position as associate professor of economics at Niagara University to join the Transitional Federal Government of Somalia as the country's deputy prime minister. The following June, Ali was named Somalia's prime minister after the resignation of Mohamed Abdullahi Mohamed, another Western New York resident.

Originally tasked with presiding over a country in the midst of a civil war that has spanned two decades, Ali's challenges grew exponentially as Somalia dealt with its worst famine in 60 years. The United Nations declared six of the states in Somalia to be "famine zones," many of which are under control of militant extremist groups.

As a result, Ali, a native of the Puntland region of Somalia, has continuously appealed to countries, organizations and individuals worldwide for humanitarian support.

The U.S. has pledged more than $100 million toward Somali relief efforts, and those in the Buffalo-Niagara region are helping out as well.

When Ali spoke at Niagara University on Sept. 19, 2011, the Niagara University Student Government Association announced it would be contributing $5,000 toward "NU Mission Somalia," a university-sponsored awareness and fundraising initiative.

On Jan. 21, 2013, the U.S. government formally recognized the first Somali national government in more than two decades, an accomplishment that many credit to Ali's leadership.

In addition, the Somali National Army, with the support of the African Union Mission in Somalia, liberated the Somali capital of Mogadishu from Al Qaeda-linked extremist insurgents in August 2012. It's reported that the government has since pushed the militants out of 90 percent of major towns in southern Somalia.

Ali joined Niagara University's faculty in August 2003. He earned a master's degree in economics from Vanderbilt University and completed his Ph.D. at George Mason University. Ali has since attained a master of public administration degree from Harvard Law School, where he received the Joel Leff Fellowship in 1998 and 1999. Prior to Niagara, Ali was a research and forecast manager for the Commonwealth of Virginia.

While much of Ali's academic research has concentrated on economic growth and development, public finance and international trade, he has shifted his focus to the effect of institutions on economic growth within countries and regions. He has spent much time in Somalia in recent years, assisting with public finance management and helping draft the nation's reconstruction and development plan on the heels of the disruptive civil war.