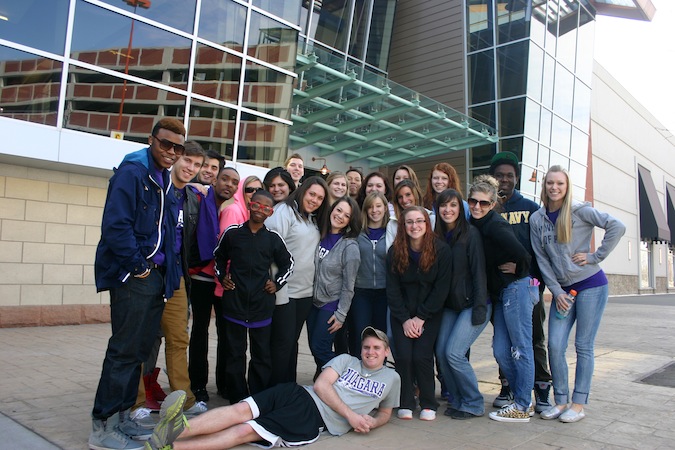 Moments before halftime of a Jan. 31 home basketball game versus Iona, a small group of Niagara University students broke out into an unexpected dance routine, or what's become commonly known as a flash mob.

The resulting video received more than 800 views when the students who conceived it - Lamont Singletary and Cory McCants - uploaded it to YouTube.

Do you see where this is going?

"In the two-plus years that I've been at Niagara, I've come to realize that our students are quite creative and extremely driven," Hearn explained. "It was my intent to simply plant the seed for this initiative and let them run with it - and that's exactly what happened. It turned out even better than I expected."

"It was a pleasure working with Niagara University," said Natalie Tronolone, Walden Galleria's assistant marketing director. "I'll be letting all of our future flash mobs know that NU is to thank for showing our mall team how it's done the right way! The students did a great job."

The final video is available on the Niagara University YouTube channel:http://youtu.be/zw_Z1x0EeKw.