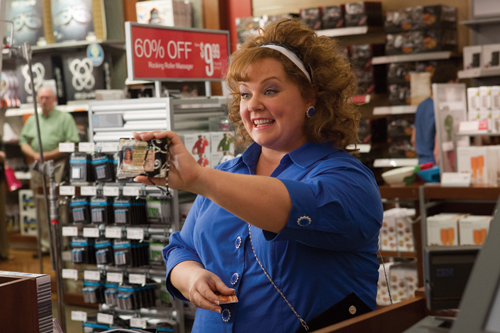 Melissa McCarthy is Diana in "Identity Thief," an all-star comedy in which a regular guy is forced to extreme measures to clear his name. (photo by Bob Mahoney; © 2013 Universal Studios; all rights reserved)

Despite the many bad reviews of the movie "Identity Thief," I decided to go see it because I know how funny Melissa McCarthy is. Although the storyline was not the best, I appreciate what this movie and McCarthy are doing for the comedy genre.

"Identity Thief" is a road trip comedy centering on Sandy (Jason Bateman) and Diana (McCarthy). After stealing his identity, Diana ruins Sandy's life by almost getting him fired and being forced to struggle even more while trying to support his wife and kids (including a soon-to-be third child). After he discovers what is happening and failing at getting the police to help him, Sandy decides to drive from Denver to Florida in hopes to convince Diana to come back with him and confess. In hopes of avoiding her own troubles in Florida, Diana agrees, but not without trying to escape every chance she gets. Eventually, Sandy and Diana go through so much in the week that follows that they become friends and care for each other. McCarthy provides the audience with countless laughs at her awkwardness and lack of class throughout the movie.

Helping bring this movie to glory and bring herself to fame, McCarthy had audiences around the world in laughter. Since then, McCarthy has set a new standard for the comedy genre and proven to all that she can create laughs just as much as the male casts that we have seen countless times.

When "The Hangover" came out in 2009, it set the bar for many male casts of comedies for years to come.  With ratings through the roof and a cast that is well known and full of hilarious males, it was inevitable that theaters would start seeing these types of movies more and more.  After a couple years of seeing movies like "Grown Ups," "Horrible Bosses" and "The Hangover II" with a funny male cast that tried to replicate "The Hangover," there was a game changer when "Bridesmaids" came out in 2011.  The reason for this was that, for the first time since "The Hangover," there was a popular comedy that had a comedic female cast.

By coming out with yet another "Hangover-type" comedy, McCarthy continues to contribute to the movie industry.  "Identity Thief" is unique in this because it stars both a male and a female actor and proves that they can be humorous together.  McCarthy has also starred in "Life as We Know It," "This is 40" and the TV series "Mike& Molly."

McCarthy is sure to be seen in upcoming movies to continue setting an example for many actresses to come.  This includes "The Heat," starring Sandra Bullock. She and McCarthy team up in a hilarious crimefighting adventure.  She will also be in "The Hangover III," coming to theaters soon.  Keep an eye out for her and see what all the fuss is about.