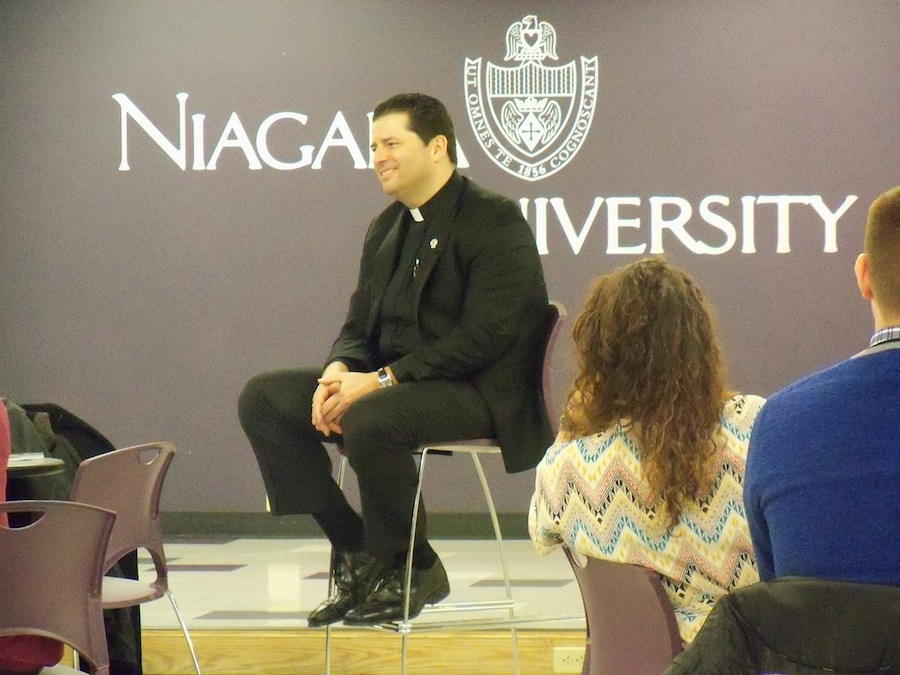 Niagara University students eager to get to know new president

by EJ Giacomini and Suheiri Rodriguez

In front of an impressive number of Niagara University faculty, staff, students and community members, the Rev. James J. Maher, C.M., was announced as the school's 26th president at a community meeting on Wednesday.

Maher makes his way to Monteagle Ridge following 22 years at another Vincentian institution, St. John's University in New York City. For the past two years, Maher has been the executive vice president for mission and student services. He also has spent almost three years as a member of the board of trustees at Niagara University.

"I stand before you in humility and gratitude in continuing to make the vision of St. Vincent de Paul a reality for Niagara University," Maher said in his introduction speech. "The time will come for me to lay out a vision for Niagara's future, but it will only happen after I have had the opportunity to actively listen to all of you."

NU students said they hope he follows through on his promise. They said they would like Maher to take the time to get to know them.

"Father should have an open door to any student at any time and continue a welcoming community," student Leanne Stuck said.

Emily Bork went on to say that an open door policy helps to build school spirit in the Niagara University community.

Skylar Fairchild, president of Niagara's student government association, may prefer something more informal. "I think it is great if we can sit and have coffee with our president," he said.

Mahar did take time Wednesday to meet with students in the Lower Level Gallagher Center.

Though Maher comes to Niagara from St. John's, he is no stranger to Niagara University. His brother, the Rev. John Maher, C.M., is a 1976 graduate of NU.

"I remember visiting the campus to drop off my brother during his years as an undergraduate student, resident assistant and student leader," Maher said.

"I say this: We Niagarans have a great story to tell. Niagara is a bright, shiny city on a hill, illuminated by great faculty and students, committed administrators and staff members who, by their example, make Niagara a special place with wonderful academic programs and a living mission," he added.

The Rev. Joseph L. Levesque, Niagara's outgoing leader, brought Niagara University to new heights in his tenure as president. Maher said he is excited and prepared to do the same.

The presidential transition will become official on Aug. 1.