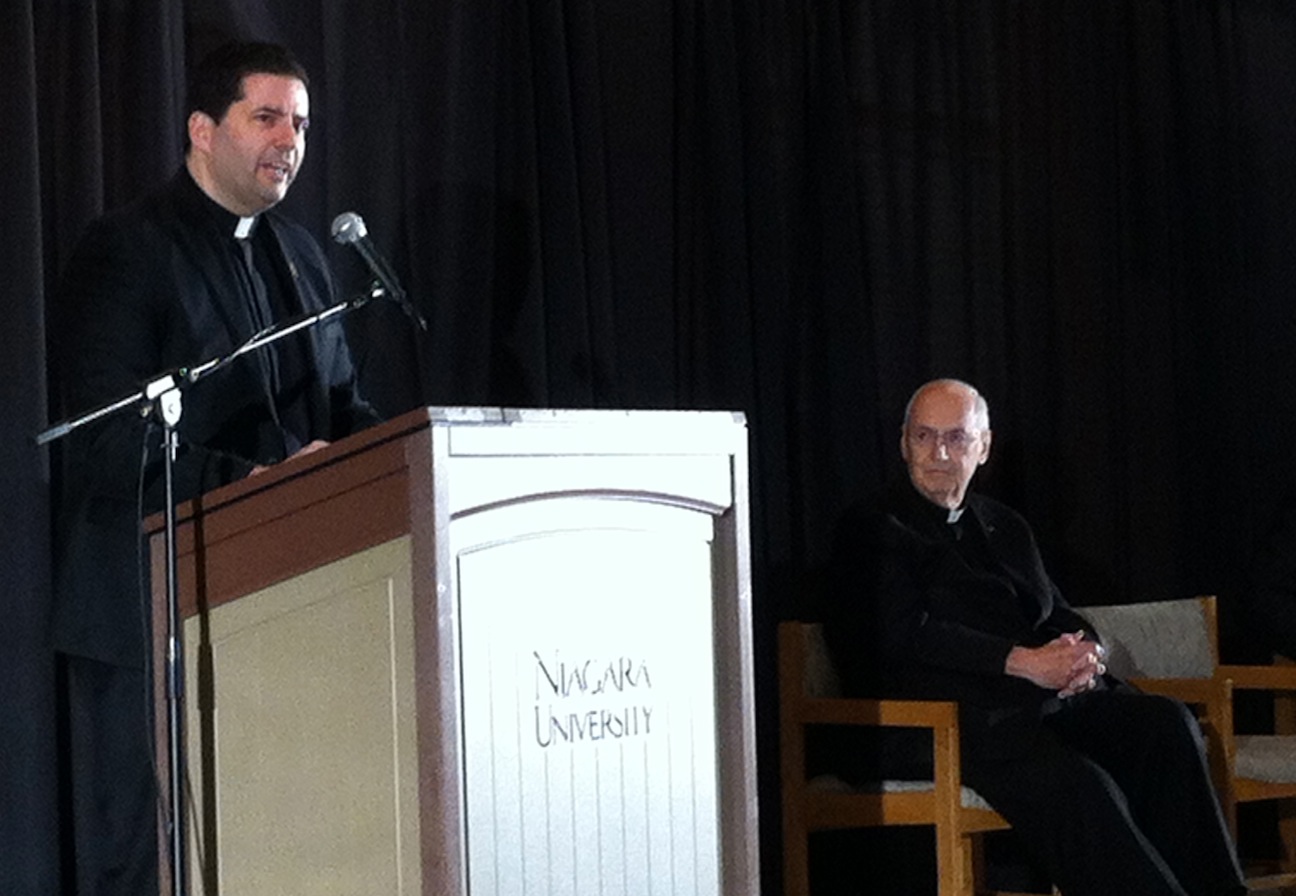 The Rev. James Mahar speaks to NU faculty and staff Wednesday as the Rev. Joseph Levesque, president, listens in.

The 26th president of Niagara University will be the Rev. James J. Maher, C.M., D.Min.

The Catholic and Vincentian institution announced Wednesday that Maher, currently the executive vice president for mission and student services at St. John's University, would succeed the Rev. Joseph L. Levesque, C.M. Levesque announced in January that he would be resigning from his position at the conclusion of the current academic year.

The presidential transition will be official Aug. 1.

"It is great to be here today," Maher acknowledged during Wednesday's announcement to the university community. "I have been well prepared by my 22 years of administrative service at St. John's University and am humbled at this opportunity, not just because of the role I have been asked to serve, but also because of where this role takes me - this great institution, Niagara University.

"The time will come for me to lay out a vision for Niagara's future, but it will only happen after I have had the opportunity to actively listen to all of you. I say this: We Niagarans have a great story to tell. Niagara University is a bright, shining city on a hill, illuminated by great faculty and students, committed administrators and staff members who, by their example, make Niagara a special place with wonderful academic programs and a living mission..

"I stand before you in humility and gratitude in continuing to make the vision of St. Vincent de Paul a reality for Niagara University."

Maher comes to Niagara following a 22-year career at St. John's, including the past two as executive vice president for mission and student services. He has spent nearly three years as a member of Niagara University's board of trustees, lending his expertise to committees on educational policy and finance.

In addition to his volunteer and familial ties to Niagara, Maher resided on the university's auxiliary campus in the mid-1980s as a member of the Vincentian Service Corps.

"It was at this special place, Niagara University, where I actively discerned my vocation to the priesthood with a young Vincentian priest, Father Greg Gay, who also happens now to be our superior general," he said. "So it is with great conviction and enthusiasm that I tell you Niagara University is a very special place to me."

During his tenure at St. John's, Maher has served as campus minister to the athletics department, vice president of university ministry, vice president of student affairs, executive director of the Vincentian Institute for Social Action, and as a board member for the St. John's Bread & Life Program, the second largest emergency food provider in New York City.

Maher pronounced his vows to the Vincentian community in May of 1989 and was ordained to the priesthood on May 26, 1990, at Mary Immaculate Seminary in Northampton, Pa. He received his bachelor's degree from St. John's University in 1984, his master of divinity in 1989, and a master's in theology in 1990.

In May 2004, Maher was granted a doctor of ministry by The Immaculate Conception Seminary and Graduate School of Theology. He focused his doctoral research on NIKE Inc., and its contracted factories in Vietnam, as well as Catholic social teaching and worker development programs.

He has attended the Harvard Management Development Program, the Stevens Institute, and the Harvard University Institute of Educational Management, and presented and published on civic engagement, Catholic education and corporate responsibility.

In recognition of his service to the community, Maher was named "New Yorker of the Week" in 1995 by Time Warner NY1. In 1998, he received the President's Medal from St. John's University and was selected as one of the Outstanding Young Men of America.

Maher received the Cross and Anchor award from Holy Cross Roman Catholic High School for exemplary service in 2001. In 2004, he was named one of the "Top 100 Irish-Americans in the United States" by Irish American Magazine. In 2009, Maher received the Pietas Medal from St. John's for his commitment, service and dedication to the university.

Along with acting as a trustee for DePaul University, Maher also serves as an appointed provincial counselor to the Eastern Province of the Vincentian Community.

"Our next president is student-focused, collaborative, energetic, strong in management and leadership, and committed to the Catholic and Vincentian tradition," stated Jeffrey Holzschuh, '82, chairman of Niagara University's board of trustees. "We are extremely confident that this man will continue to move Niagara forward, building upon the strong foundation laid by Father Levesque."

During Levesque's 13 years as president of Niagara, the university experienced a continuous process of positive transformation, highlighted by close to $100 million in new campus construction, renovation and improvement projects.

Father Levesque will remain on campus at NU with the title of president emeritus, as approved by the university's board of trustees.