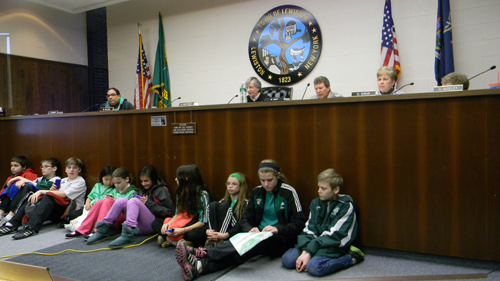 Visitors of all ages crammed in the Lewiston Town Hall meeting room Monday to express their views on the proposed recreation and senior center.

Photo and story by Terry Duffy

Overall, the nearly two-hour session very much lived up to its billing as being informative.

It led off with a meeting of the Lewiston Planning Board. There, Jerry Wolfgang, chair of the Town of Lewiston Environmental Commission, appeared and presented his group's recommendation of a negative declaration for the estimated $9 million-plus center, which now allows the Lewiston Town Board to proceed with the required State Environmental Quality Review as lead agency.

Soon after, Kristin Savard, owner and president of Advanced Design Group, provided a very detailed presentation to the Planning Board, covering a host of engineering and site/design issues relating to the center's plan and construction. "We have gone through all the comments that we received, and we provided a revised set of drawings, a revised engineering report ... to the town engineer, the town building department and the fire marshal," she said.

Savard opened with a discussion on traffic, where she reported that Creek Road is a state road and Department of Transportation approval is needed prior to any permits being issued. She said the traffic counts and projections solicited by Advanced Design Group thus far are favorable. "What was discovered is that the facility will peak on alternative times than the current traffic. ...Volumes for that facility are projected to be less than what is currently happening on that road," said Savard, adding that a worst-case scenario for any Creek Road adjustments would be a turning lane added for the center's use.

Regarding design/drainage issues on the Lew-Port School District land eyed for the center, Savard said a flood plain does exist around the ditches that surround the property, but that no actual base flood information exists. As a result, storm drainage system modeling was done by Advanced Design Group under worst-case scenarios of a 100-year storm and no drainage concerns are projected. Similarly, no groundwater issues were found to be a future concern for the property.

As to water/sewer demands, Savard said a study on the facility's anticipated demands and capacity would be done as part of its construction documents. "We do not know the demands for the facility (at this time)," Savard said, adding that once engineering studies are completed the town would need to upgrade the Creek Road waterlines. "It is our understanding that the water line along Creek Road has flow problems. It's a known issue," she said, adding that any improvements would benefit the whole area. Any sewer improvements would be performed in the same fashion, to meet demands.

Regarding parking, Savard said Advanced Design Group compared existing similar-sized facilities to architects' projections for the rec/senior center and determined that 253 spaces would be needed to handle the center's varied athletic/senior/social activities. "Should there be an event where we find a need for more parking, we have options," Savard said, noting the town has shared parking agreements with the Lew-Port School District and that alternate parking exists nearby in local parks.

Special dedicated parking and handicapped parking with 14 spaces, ramps and curbing would be provided for the senior center and adequate parking lot lighting would be included throughout. As to roadways, two-way traffic would be included in front of the center; and Daryl Johnston Drive and all adjacent ring roads around the center would be widened to a width of 26 feet to accommodate traffic/use needs, including the possible use of any large vehicles, such as those associated with RV shows, etc.

Savard said any future building expansion would not be considered as current plans envision the rec/senior center facility to be at full capacity when complete.

Other minor areas discussed included the relocation of the school district's information sign/message board outside; plans for installing two grease traps inside the center to accommodate the senior center and concession stand, plus assorted soil, drainage and landscaping and garbage refuse collection needs.

"We will continue to resolve all issues," Savard said, telling Planning Board members that she has discussed all these issues with the Lewiston-Porter School District and that both sides are in agreement.

"We've been communicating back and forth for several weeks now," said Lew-Port Superintendent of Schools Chris Roser. "It's really covered in our letter of intent; we're still negotiating, we really don't see any problems at all."

Planning Board members all appeared comfortable with Savard's presentation and voiced no concerns. A motion to approve the plan to forward to the Town Board was then presented and approved by a 4-1 vote, with only member Carol Catlin voting no.

Soon after, the Town Board convened to begin the public comments segment. A full house packed the Town Hall meeting room, with attendees spilling out into the front hall area. Visitors ranged in age from school children to seniors. Over the course of more than an hour, 25 spoke and virtually all came out in strong support of the plan, although there were also some naysayers.

•Tim Ireland, president of the Niagara Pioneer Soccer League called it "a wonderful addition for the community." Ireland said that Niagara Pioneer currently serves 800 families and that the town could benefit from soccer-related revenues of $136,000 to $140,000 annually if the center was built.

•Realtor Tom Deal, who told the board a "facility of this type will enhance much of Lewiston." Deal also presented the board an on-line petition bearing the signatures of more than 200 who support the plan.

•Ransomville resident Jason Lombardi, whose father Jim formerly served as a Lewiston town supervisor, told the board that such a project would make Lewiston a "destination place" for many and called it a win-win.

•Lewiston-Porter coaches Mark Waple (varsity baseball and modified boys basketball) and Kevin Jaruszewski (girls JV basketball and boys modified soccer). Both came out in strong support for the plan, with Waple telling the board, "It's a long time coming," and Jaruszewski saying the "Benefits are enormous; it's a win-win for everyone."

•Resident Paulette Glasgow, oftentimes a critic of Supervisor Steve Reiter and the town on its various proposals, told the board, "I look at this project with numerous questions, with common sense answers."

Glasgow said that while overall she did favor the recreation center concept and its numerous benefits to the community, she also questioned its size and its cost. Particularly, Glasgow had reservations with respect to Lewiston's seniors and the need for the existing senior center to relocate to Creek Road.

"Do our seniors need a better and improved facility? Of course they do. But our seniors love where they are and don't want to move," she said, adding that the town has the financial resources right now to improve the existing senior center.

As to funding the proposed center with Greenway money, Glasgow commented that such a move could eat up roughly 18 years of dedicated Greenway funding and said the town should be considering a public referendum before moving forward. "That is 18 years of Greenway funding that can't be used for economic development or job creation," said Glasgow. "I would hope ... you would give the public the opportunity to tell you, through a referendum, if they wish this to be done." (See Page 4 for additional comments on Lewiston's seniors by Glasgow).

•A Sanborn resident who listed her name as Vicki, vented to the board on the location for the proposed center. The woman stated that the center's location on the Lew-Port campus would prove to be a major inconvenience to the 5,000 residents who live in the Sanborn area.

•Bill Angus, who serves a community relations director for Assemblyman John Ceretto, conveyed the assemblyman's enthusiastic support for the project in a statement. "This is an exceptional opportunity to create a valuable community asset without utilizing taxpayer dollars. I support the town's endeavors to continue supporting our children, seniors and recreation needs."

•Travis Dietz, a rep for Laborers Local 763, praised the proposal for its economic impacts and job creation, including construction jobs. "The center would create jobs, it means a positive impact," said Dietz.

•Former Village of Lewiston Mayor Richard Soluri, speaking on behalf of State Sen. George Maziarz, complimented the project on it being "very professionally done," and said that with it "Lewiston has to start thinking about the future; it has to accommodate its needs."

•Lew-Port student Ben Hastings, who told the board he speaks for many Lewiston-Porter athletes who support the rec enter "wholeheartedly."

•Saunders Settlement Road resident Sharon Keller said she supported the recreation center but that she wished the town would keep the senior center on Lower River Road. "The seniors like it where they are; keep it where it is," she said.

•Oriole Lane resident Ed Van Valkenburg told the board that a move to a new location for Lewiston and Sanborn seniors' populations is needed. "Space is very limited there," said the resident. "Not all seniors want to stay at the current senior center."

Reiter wound up discussion by emphasizing the "seniors have had a lot of input" and that the board has discussed the possibility of not including a new senior center in the overall plans for the new facility. "This forum is just a starting point, your opportunity to voice your view."

Calling the project "a big endeavor," he continued, "This is our starting point."

The town announced its next information session on the rec/senior center proposal would be Monday, March 25, with sessions also scheduled for April and May.