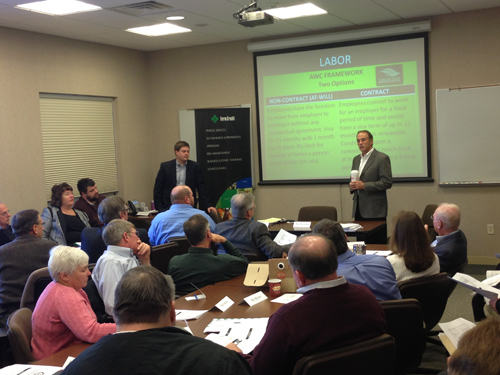 Agriculture advisory board will meet routinely; discuss issues being debated in Congress

Congressman Chris Collins (NY-27) met with approximately 40 local farmers in Batavia Friday at the first meeting of his agriculture advisory board. As a member of the House agriculture committee, Collins will routinely look to the group to help shape his polices and positions on matters before the committee.

This Congress, the agriculture committee is expected to craft a five-year farm bill and be heavily involved in any new immigration reform related to guest worker visas for farm employees.

The advisory board is made up of several dozen local farmers from every corner of NY-27, representing a variety of agriculture interests, including dairy, vegetable fruit and grain crops, and wine producers. Members also include representatives of agricultural support industries and local farm bureaus.

"Too many of us take what we put on our table for granted," Collins said. "That is not the case for many families in this congressional district where farming is a way of life and the actions or inactions of the federal government have a direct impact on their livelihood. I am honored to serve on the House agriculture committee not only to fight for our local farmers, but for the incredibly important economic driver that agriculture is for this district."

"I want to thank these board members for taking time out of their busy day to share with me their insight and experience," Collins added. "This group will be a great resource and I will use their feedback and counsel to make sure Washington's agriculture policy is in the best interest of Western New York and the Finger Lakes."

"New York Farm Bureau is very appreciative of Rep. Collins for taking an active interest in hearing from the farmers in his district," said New York Farm Bureau President Dean Norton. "The knowledge he will gain will serve him well on the House ag. committee as he works to pass a much-needed farm bill and improve the economic conditions for all farmers in this state who provide healthy, local food to their neighbors and the world."