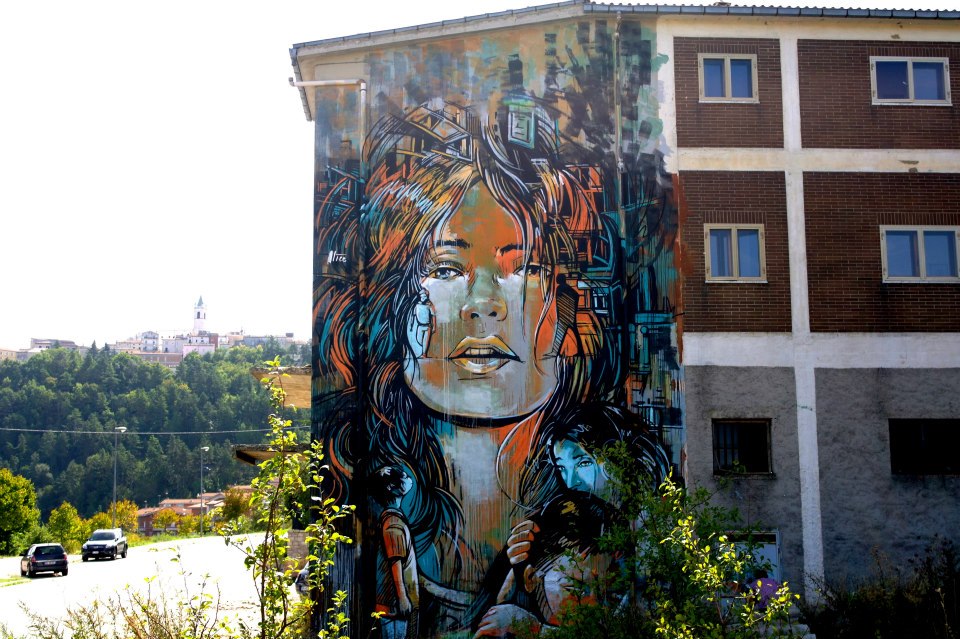 5 street artists you should know about

Five innovative street artists each working in different types of media create and display their work on streets and cities all over the world.

Though an exhibition in a gallery to see art is the usual way that art is displayed, for some individuals, using the world around them as their gallery is their preferred method of expression. Street art consists of all types of media from murals to photography to outdoor installments, all different types of art that are created and displayed in plain view of the public. These artists are proof that some of the most beautiful and fascinating pieces of artwork can't always be found inside a gallery, but in reality are just outside, in the cities they use as their artistic playground. Here are five street artists who share their visions with the world by creating and displaying their pieces in plain sight. These five artists have taken their respective mediums and created innovative, thoughtful and intriguing art on streets and cities all over the world.

It can be said that there is no subject more fascinating than a human being. For photographer Brandon Stanton, his work reflects this idea. Stanton is a photographer in New York City and the creator of a project called Humans of New York, or HONY for short. Stanton takes street portraits of the many residents and visitors in different places in New York. The project's website features almost 5,000 photographs showcasing the various individuals who live in New York, each one offering a peek into the lifestyle of New York's inhabitants. His portraits feature everything from elderly couples to young children, including street performers and even an occasional drawing from the sketchbook of passersby on the street or the subway. Humans of New York has inspired similar projects worldwide, such as Humans of Sydney, Humans of Budapest, even an animal-oriented spinoff, Dogs of New York. From starting in one city, Stanton has inspired a worldwide photo project to capture a moment in the lives of humans everywhere.

Here are some links to view Stanton's work:

Drawing on walls isn't just for mischievous children anymore. Walls are the preferred canvas of street artist Alice Pasquini, whose bright illustrations burst with color on walls in cities around the world. Her street work has been featured in Sydney, Paris, Rome and Oslo, as well as other major cities. Within her art she seeks to represent and explore human emotion in a different way, with a strong focus on representing women in a way that is atypical of the sexualized view of women that is commonplace in today's society. Pasquini's works are colorful, often featuring blue and orange as highlight colors, depicting different faces and scenarios of simple moments of life, such as blowing bubbles, sleeping or sharing a kiss. Her work has been featured in galleries in Italy, the United Kingdom and Rome. Pasquini has an upcoming solo show coming up at the 44309 street art gallery in Dortmund, Germany.

Stuart Pantoll, or more famously known as Slinkachu, is a English street installation artist who places miniature figurines around the city posed in clever and humorous ways. His "Little People Project," partly an installation project and partially a photography project, focuses on the feelings of isolation and overwhelming elements of big city life, while also evoking the humor in this lifestyle. The tiny installations also work to encourage more awareness of city-goers, as the pieces are easily missed because of their small size. The little people in the installments are made from train set figurines that he modifies and repaints, finding props when needed from things such as a beer cap, or an orange or banana peel. Slinkachu's work has been featured in shows in London, the United States, Switzerland and Germany.

Instead of drawing on walls, artist Mademoiselle Maurice takes a different approach, instead attaching origami in clever patterns to city walls in France. With the colorful folded paper she creates patterns that illustrate different basic shapes such as hexagons, hearts, and the occasional word, outlined with the origami. The works are very colorful, expressing emotions that can be appreciated and attached to the simple places that people visit every day. Behind each of her pieces is a different motivation; one piece is dedicated to the victims of the nuclear disaster in Japan in 2011, another is to support a whale rights cause. One interactive piece, located near a construction site, shows beauty in a generally less than beautiful construction space.

Banksy, an internationally baffling individual whose identity remains unknown (but speculated over), is a bold street artist whose stencil street art is made up of typically satirical works of political, social and ethical commentary. There is generally a very split opinion over Banksy's work, some thinking that he is tactless and others admiring his frank method of expression. In March of 2005, Banksy placed his own subversive artwork at the Museum of Modern Art, the American Museum of Natural History and a few other noted museums. His work is based in England, but he is known internationally as his pieces appear abroad as well.