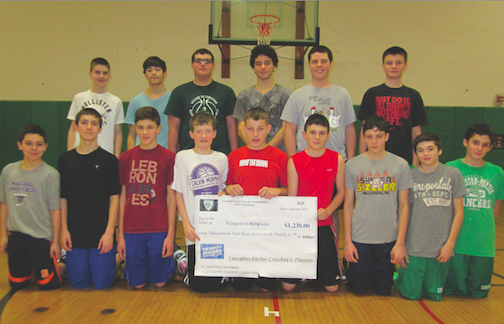 Players and coaches at Lewiston-Porter middle and high schools worked together to raise money for their schools while also collecting donations for Niagara Hospice. Players from the winter sports teams took part in Niagara Hospice's "The Mighty Niagara" Discount Card fundraiser. The card offers discounts at dozens of local restaurants and businesses and sells for $15. With more than 250 cards sold, the students raised $2,460 for their school; an additional $1,230 was donated to Niagara Hospice.

"The Mighty Niagara" Discount Card fundraiser is an opportunity to raise money for schools and organizations while helping to support the work of Niagara Hospice. For more information about the fundraiser, contact Maureen Rizzo at Niagara Hospice at 716-280-0728.

Niagara Hospice has provided end-of-life comfort, care and support since 1988 to more than 20,000 Niagara County individuals and families faced with terminal illness. No one is ever denied hospice care due to ability to pay. For more information, visit www.NiagaraHospice.org or call Hospice at 716-439-4417.