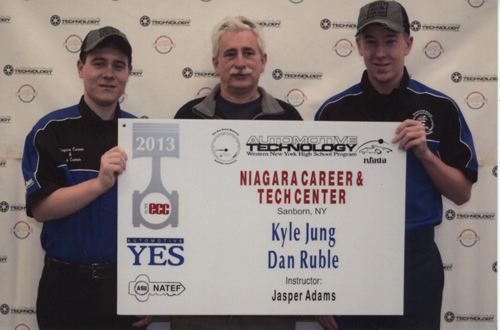 Kyle Jung, a senior at Niagara-Wheatfield and Dan Ruble, a senior from Wilson, took first place at the Niagara Frontier Automobile Dealers' AutoTech Competition on Jan. 19 at Erie Community College.

The two Orleans/Niagara BOCES students, who take auto mechanics at the Niagara Career and Technical Education Center, beat out nine high school teams from around Western New York for the honor to compete in New York City at the National Automotive Technology Competition.

Their teacher Jasper Adams is extremely proud of his students.

"The two-person teams of students work through a series of diagnostics, workstations and then work on a 2013 Ford F-150 XLT Supercab 4x4 pickup that has been bugged with problems to test their skills and abilities. It is very challenging," Adams said. "Since Western New York Ford dealers sponsored the competition, the students practiced with Tyler O'Callaghan, a former student of mine. He was the winner of the competition in 2009 and now works with Baldo Ford. They did an awesome job."

NFADA tries to make the experience as real as possible to what a technician might encounter if a car is brought in with a problem. Kyle and Dan both said they felt good about what they accomplished.

Dan said he had a good time. "I thought the competition was fun. They threw a lot at us. We had to figure out why an ABS light wouldn't go off and why a parking brake would not release and why the throttle wasn't working correctly. It was really unexpected that we won. It was great."

"I was so excited when we won," said Kyle. "I am really looking forward to going to New York City to compete."

The New York City competition coincides with the New York International Auto Show and will also include a written test and a job interview. The students are polishing up their resumes to go against 30 teams.

"Win or lose they get to see New York City and compete against the best in the nation. It is a great experience," said Adams.