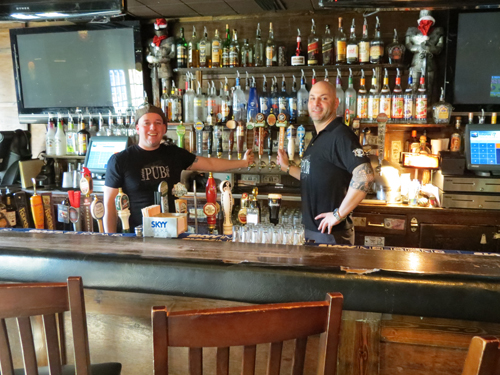 Ed Webster and Ken Scibetta at The Lewiston Village Pub and Restaurant.

What began with two guys, a bar and a pizza place has, five years later, morphed into one of Lewiston's most successful eateries.

When Ken Scibetta and Ed Webster opened The Lewiston Village Pub and Wing Company on Jan. 19, 2008, it was their intent to run a bar.

"I know, when we first opened - we talk about this all the time - it's nowhere like we thought it was going to be," Scibetta said. 'Our whole goal when we first opened was, Ed and I talked; we had the same views on the restaurant business. We both said, 'Hey, if we can do this, and basically make a living like we're doing now, basically making the same money we were, working from somebody else, but have our own place, it'd be great.' Our focus when we first opened was pretty much bar. We subleased the kitchen to a couple of guys, and so our focus was all on bar. Ed bartended. I kind of served tables and bartended. And Ed served tables. And we were the only employees. Fast-forward five years later, we have almost 25 employees, (and) we've taken over the entire building, as where (one half) was a gymnastics building at first."

When the Wing Company left midway through 2008, Scibetta and Webster were forced to take over their pub's food operations. What began with pizza and subs soon turned into something much more.

"I never saw us selling ahi tuna and rack of lamb, and 30-day, dry-aged porterhouses, and some funky burgers, and just all this stuff. It was never our concept from the beginning, and it's kind of (grown) into that," Scibetta said. "I think we did it the right way in starting off very small, you know, getting that eye-to-eye contact with all of our guests, and knowing their entire families, which we do. We still have the same people that have been coming here since day one."

The Pub, as it's more commonly known, has become a relaxed, go-to destination for casual and fine dining. It has a full menu, a large dining room and banquet space.

"I think we had always hoped to be a neighborhood restaurant-slash-pub, where people would come here on a more frequent basis and we would have a solid core of people that loved our restaurant, loved the pub, and I think that's exactly where we are at," Webster said. "We have the same people that love coming here. When we get tourists, or we get new guests, they seem to feel like they want to come here often. So, we have people that drive in from Amherst (for example), at least once or twice a week, because they enjoy it and they've made this their neighborhood pub, which is pretty nice."

Through their annual "PubFest" fundraiser, Ken and Ed have raised almost $100,000 in four years. The majority of that money has gone to Variety Kids Telethon. Last year, funds also went to the Village of Lewiston and its first responders.

"Personally, I feel that one of the reasons why we've been so successful is we've tried to just become part of the community," Scibetta said. "Our biggest thing is, you give to the community, they'll give back. And so Ed and I have always been on the front lines of fundraising. ... A business is only as strong as the community in which it resides."

"Without the community we're nothing," Webster added.

In the next five years, Scibetta and Webster plan to incorporate more multimedia applications into the front dining room, thus enabling it to double as a multi-function room. The rear dining room will be upgraded and made "spectacular" (think fireplace and trusses), Webster said.

The business partners and best friends recently purchased the former Auggie's Sunrise Diner on Military Road in the Town of Niagara.

"The new focus there is to have a pub, as well, but we want to be more of what you would call a 'gastropub,' " Webster said. Modeled on taverns in England that serve lamb, duck and different fishes, "I think our focus here is to try and encompass what those pubs are doing, as well as maybe some Las Vegas-style pubs, and put that into this area as something new and exciting for dining - interesting foods that people have never tried before" as well as more varieties of beer and wine.

Ken and Ed are currently renovating that restaurant, and plan to open it in coming months.

Next Saturday, they will celebrate The Pub's five-year anniversary. That night, they'll offer guests an assortment of food and drink specials.

Oh, and one other thing.

"We're going to have a huge kickoff for the Sabres game," Webster said.

The Lewiston Village Pub and Restaurant is located at 840 Center St.

We welcome your tips: