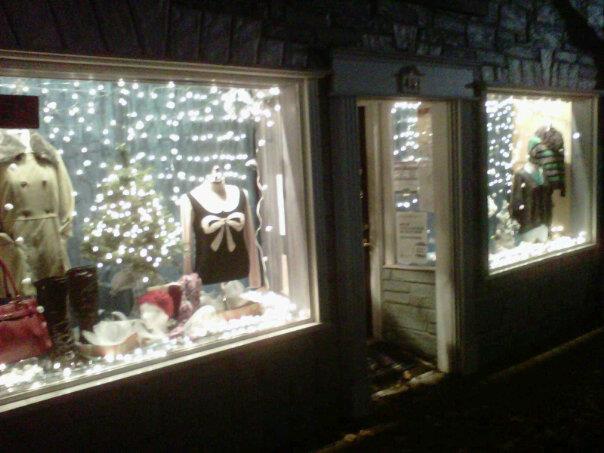 Black Friday doesn't have to be associated with "big box" stores and middle-of-the-night wake-up calls any longer. Local retailers in The Village of Lewiston came together this year for Lewiston's first retail district-wide Black Friday event.

Black Friday doesn't have to be associated with "big box" stores and middle-of-the-night wake-up calls any longer. Local retailers in The Village of Lewiston came together this year for Lewiston's first retail district-wide Black Friday event.

Several Lewiston merchants opened their doors at 7 a.m., offering door-busters and special deals and then additional discounts throughout the day.

Angel to Apple owner Jamie Symmonds has been running Black Friday sales for the past four years at her clothing and accessories boutique, and this year was no different. At 7 a.m., Symmonds arrived at her store with multiple eager customers waiting to cash in on her door-buster deals.

She explained, "The first time doing anything is difficult." But, "People were very supportive of Black Friday and of Lewiston."

Symmonds said she hopes that more retailers in Lewiston will participate next year, and grow it for years to come. "Collectively, as a community, we need to give it (Black Friday) another chance."

Tony Petrocelli, owner of Lewiston Music, also participated in the Black Friday event, and was very pleased with the outcome.

"I was pleasantly surprised," he said.

His store normally opens at noon every day, but he was happily greeted by more than a dozen customers before 10 a.m., something that would not have happened without opening early for the event.

Petrocelli offered deals that included discounts on merchandise, gift certificates and buy-one, get-one music lessons that drew in four new music students. He plans on participating in the event next year, and he said he hopes Black Friday will continue to grow with support from the community.

Employees at D'Avolio's Olive Oils, Vinegars & More, another retailer that participated in the event, said they were very pleased with their outcome, too. At 7 a.m. when the store opened early for Black Friday sales, store workers were greeted by a few customers anxiously waiting outside their door. D'Avolio also plans to participate in the sale next year.

Grandpaws Pet Emporium was also featured in the event, but their employees were not greeted by "early-bird" customers when they arrived at 7 a.m.

These Black Friday participants offered giveaways and storewide discounts for their patrons throughout the day. Although they did not have a busy morning, Grandpaws did have a busy day overall.

The store is hoping to get the word out earlier about Black Friday next year.

Shoppers arrived to Angel to Apple before 7 a.m. to enter to win special store discounts. (photos courtesy of Jamie Symmonds and Jennifer Pauly)