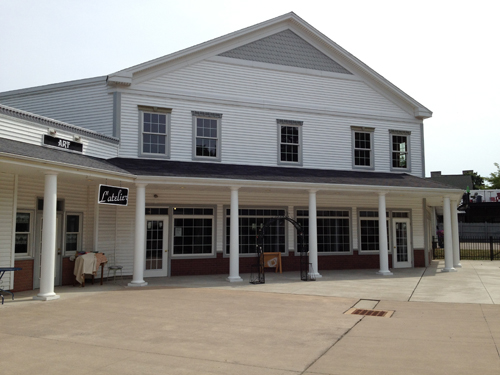 The largest building on the corner of North Fourth and Center streets in Lewiston is ready to open to the public.

Professor Herbert Richardson's vision for his property on North Fourth and Center streets is finally coming to fruition. The entrepreneur and Edwin Mellen Press author is about to open his two-story corner building, which he is calling "Lewiston Small Shops."

Lewiston Small Shops will serve as an "incubator," Richardson said, for potential business owners. He will offer between 17 and 20 units (table-size and cubicles), where budding retailers can display their high-quality arts and crafts or services such as photography.

"It seems to me that that is something that almost has to be developed here," he said, because Lewiston is home to Artpark, a world-renowned art and performing arts center.

"It's crazy ... not to have something down here on Center Street that complements that," Richardson said. "My own sense is this is madness. You bring 20,000 people into the village for music and artistic events, and you've got nothing in the village that will capture this interest for, can I say, 200. ... I think that there is a problem there.

"I think that one of my goals is - has always been - to have something in the village that would complement Artpark and that would give people coming to Artpark a reason to come here either before the performance or after the performance on another day. ... My own view is that there is really room to develop art- and craft-type small retail units here."

Richardson estimated the cost to start a new business in Lewiston is $30,000 ($12,000 for rent and utilities, and $18,000 for payroll). Lewiston Small Shops will lease table-size units for $75 per month ($900 per year) and cubicles from $180 per month. All leases are on a full-year basis and require prepayment. Closet space also is available for $125 per month.

While tenants will display their goods inside the building, they don't actually have to be on hand to sell them. Marguerite Rupnow, one of Richardson's employees, will manage the store and cash out each customer.

"We want upscale merchandise," she said.

Lewiston Small Shops will offer credit card services and cover the cost of utilities. For each cash sale credited to a vendor, the manager will charge 20 percent for processing (25 percent for credit card purchases).

Once tenants fall into place, Lewiston Small Shops will officially open. Hours of operation will be 10 a.m. to 6 p.m., Monday through Saturday.

"I'm interested in helping some people start some businesses," Richardson said. "It's a $25,000 to $30,000 investment to do a small retail business. That's a massive amount of money for people to pay out when they're not even sure that it will work."

"Part of the problem in retail is you don't know until you try it. There's no way you can predict," he said. "My theory is. ... Are there some people out there that would like to try to rent a small space?"

Richardson seemed to think there are such people. Moreover, he estimated one new business could start each year as a result of his testing grounds.

Over 10 years, "That would double or triple what we have here now," he said.

But up until now, the centerpiece of the property, the two-story building, has sat empty.

Richardson's goal from the beginning was to do what he is doing now: offer space to artists and creative types. When asked why it's taken four years to open the building, he said, "It's a gigantic expense, both in terms of staff and funding. This is funded out of the cash flow of the Edwin Mellen Press, which is a scholarly publisher."

He said the cost in getting to this point, where the building can open to the public, has been about $700,000.

"The goal has been to do a little bit every year," he said. "We've gradually gotten to this point."

Richardson noted the corner of Fourth and Center was once a gas station, and "No bank will loan any money against any property that is located on a former gas station, because they're afraid they'll get liability for any environmental things."

Some Lewiston business owners have expressed their concern about the black fence that surrounds Richardson's units. Coupled with the pillars and the buildings' setbacks, which are further away from Center Street than neighboring stores, passersby can miss what's inside Fourth and Center.

"It looks too forbidding," Richardson said.

He initially saw this unique configuration as a positive, but, "Now I see it as a negative," he said.

"I really have come to see that people want to be up there (on Center Street)," Richardson said. "One of the things I would like to do. ... I think we need to get more activities out on the sidewalk."

"Our failure to have something out on the sidewalk makes this look like a prison," he said. "It's (a) terrible problem."

To remedy this, Richardson said he'd like to have more displays in his courtyard, as well as books and clothes for sale; people eating and drinking; and maybe even something like a farmers market.

"We're moving in that direction," he said.

Village of Lewiston Mayor Terry Collesano said residents would be "enthused" to see more activity at Fourth and Center.

"I'm elated that finally something is happening on that corner," he said, noting he daily receives questions about the property. "Any kind of activity - that is great. That is probably one of the best corners for (potential) business."

In addition to Lewiston Small Shops, Richardson plans to open a small, 25-seat theater (in between his two buildings), which would screen independent and documentary films, and serve as presentation space for tenants.

The top floor of Lewiston Small Shops will remain closed until extra space is needed.

Those interested in renting a space at Lewiston Small Shops can contact Rupnow at 716-754-2420 or visit her at 402 Center St.