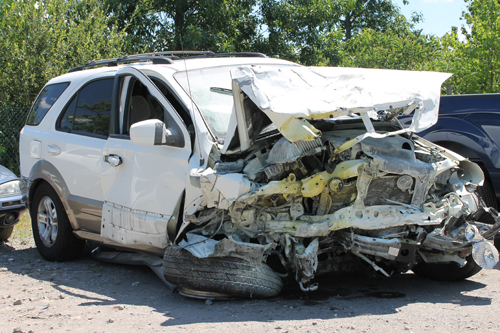 A sport-utility vehicle driven by Richard Hildebrandt was going the wrong way on the I-190 on Grand Island. (photo by Larry Austin)

Crash claims three lives on I-190

Shortly before 1 a.m. on Monday, July 9, Grand Island Fire Co. rescue personnel responded to a motor vehicle accident in the southbound lane of the I-190 near the Staley Road overpass. The horrendous crash was reportedly caused by a driver who was travelling in the wrong direction and then collided head-on with another vehicle.

According GIFC Deputy Fire Chief Matt Osinski, this collision resulted in fatal injuries to three of the occupants, a 20-year-old and a 21-year-old from Hamtrack, Mich., and a 21-year-old from Bangladesh.  In addition, 22-year-old Burhanur Ralman of Hamtrack and 86-year-old Richard Hildebrandt of Kenmore were treated by GIFC medics for traumatic injuries and transported to Erie County Medical Center for further medical attention.