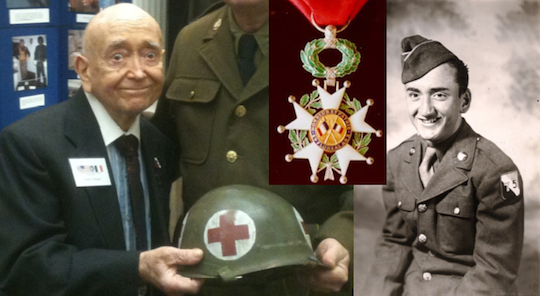 By the decree of the President of the French Republic, Joseph M. Consiglio is appointed to receive the "Chevalier" of the Legion of Honor for his contribution to the liberation of France during the Battle of the Colmar Pocket in World War II.

In early February 1945, directly following his service in Belgium in the Battle of the Bulge, combat medic Cpl. Joe Consiglio once again entered front-line combat with 1st Battalion, 289th Regiment of the 75th Infantry Division, this time fighting alongside soldiers of the French First Army to liberate the City of Colmar from Hitler's last Nazi stronghold on French soil.

The award ceremony will take place at historic Old Fort Niagara - Visitors Center Theatre - 3 p.m. Saturday, July 14. It is fitting that this historic French fort is the setting for this great honor, for it was here where Consiglio first entered his military service in 1943.

The public is invited to join the Consiglio family as French Consul Pascal Soarès bestows the French Medal Insignia upon Joe.