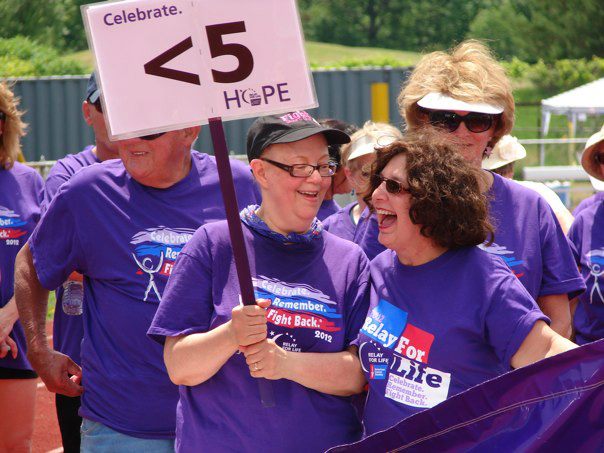 The sun was shining at the Lewiston-Porter High School track for the 15th annual Lewiston Relay For Life on Saturday, June 16. The day started at noon with the survivors lap and a speech from this year's honorary survivor, Maureen Castiglione, aka "Mama Moe."

Castiglione was diagnosed with stage-2 breast cancer on Dec. 8, 2010, and on Valentine's Day had a mastectomy. She is a mother of five, who all graduated from Lew-Port High School.

"No one wants the cancer membership card," said Castiglione, "But my family and friends got me through it."

She explained how her family took turns bringing her to chemotherapy. When she got her radiation schedule, different friends signed up for a day to take her to her appointment. There were only three days out of the 38 that she drove herself to her appointments.

Her journey has taught her to slow down and rekindle friendships that she lost along the way. As life goes on people just get busy, but since she was diagnosed she spends more one-on-one time with friends and family.

"We should really treat each other as we're sick every day because if you treat people like that, you would spend more time with them every day and be kind and peaceful," said Castiglione.

During her honorary survivor speech, she shared with the crowd her four favorite "F" words that got her through her battle with cancer - faith, family, friends, and freedom.

Castiglione said, "I hope they can help somebody else, because we're all in this together now."

When asked how she felt about being chosen as this year's honorary survivor, she humbly replied, "so many people are stricken with cancer, why pick me?"

But sitting there talking with her it was clear why she was chosen. Her family and friends meant the world to her. She talked more about how amazing everyone else is than she did about herself. Every couple of minutes somebody would come over and offer her water or freeze pops or just to give her a hug and thank her for being the amazing person she is. She wouldn't allow a photograph of her without all of her "support system" there with her. A smile never left her face.

It only took a five-minute interview with Maureen for this writer to understand why she deserved to be the honorary survivor.

"I never knew where this whole journey would lead me; it's led to just some phenomenal places," said Castiglione, "and this is one of them."

The Lew-Port track was filled with a variety of activities throughout the day including Zumba, face painting, and a basket auction.

This year the people involved in the Lewiston Relay For Life raised more than $73,000 for the American Cancer Society.