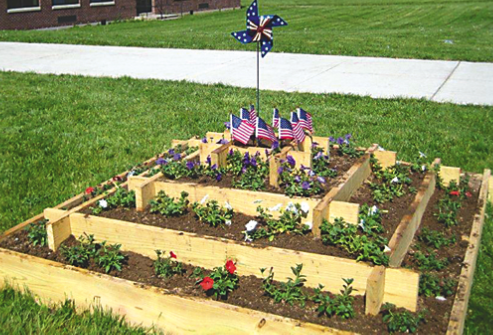 The finished patriotic garden on the Lew-Port campus.

The four-tiered garden, which features red, white and blue flowers, was created as part of Foley's Eagle Scout project for Boy Scout Troup 829 from Youngstown.

Foley is a member of Lewiston-Porter's JROTC program. He recently joined the Air Force Reserves and leaves for Basic Military Training at Lackland Air Force base in Texas on July 10.

He will then move on to the Sheppard Air Force Base for six months to complete his training in aerospace maintenance. When Foley returns home in February 2013, he plans to attend Niagara County Community College. His future plans are to become a police officer or become active in the Air Force.

Foley has also been an active member of the Lewiston Police Explorers program. As part of his Eagle Scout project, Foley was responsible for designing, assembling and installing the garden, which is located between the middle and high schools. He independently sought out and received generous donations for all the wood, stones, topsoil, flowers and other materials from the following: A-1 Landscaping, Goodman's Farm Market, Home Depot, Lincoln Park Nursery, O'Connor's Nursery and Lewiston-Porter High School Principal Paul Casseri.

The Lewiston-Porter JROTC program will maintain the garden.