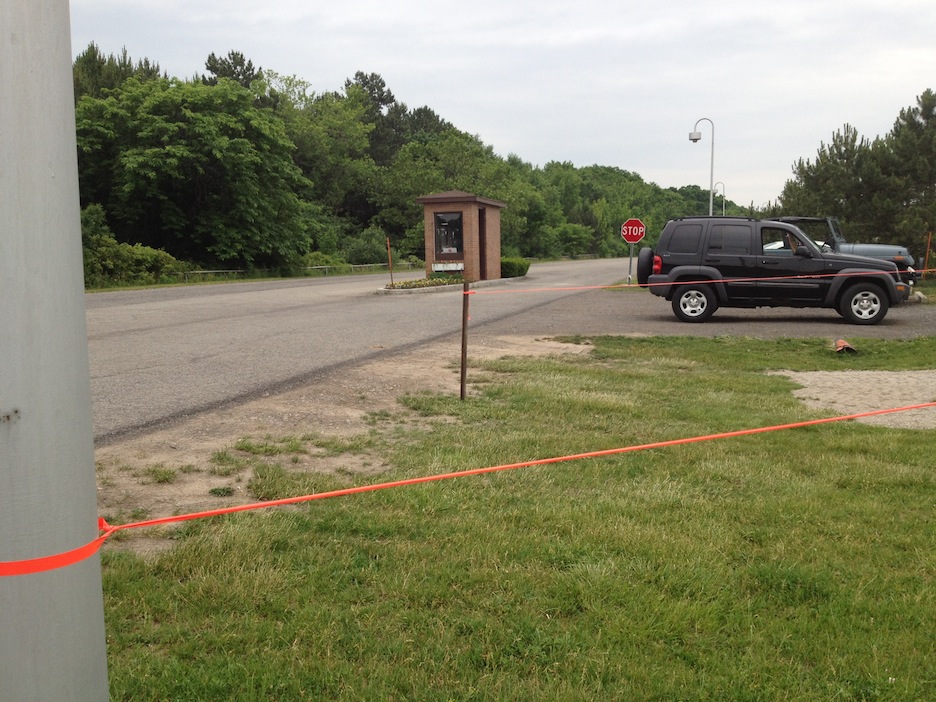 These red ropes direct motorists to a new parking lot -- ahead of Artpark & Company's -- along the Lewiston plateau.

Artpark, Village of Lewiston at odds over parking

As the video explains, a disagreement between Artpark & Company and the Village of Lewiston has resulted in the installation of a new paid parking lot on the upper plateau.

On Monday, the village's Department of Public Works created a pathway (the red ropes, pictured), which will lead motorists to the municipality's own parking lot - directly in front of Artpark's tollbooth on Portage Road.

This move was the result of stalled talks between the two sides over parking revenues. Artpark & Company is charging $5 for patrons to park in its upper lot. The Village of Lewiston wanted between $2.50 and $3 for any cars parked outside of the lot and on plateau grounds.

"We were trying to work out a mutual agreement as to what we could possibly get out of it - the village - being that it is our land," Village Mayor Terry Collesano said Tuesday. "We couldn't come up with a mutual agreement, so we are just reclaiming what is ours, and we're going to charge ourselves."

"This is the first I've heard about it," he said Tuesday.

"We had one meeting with the mayor. ... This was about traffic and everything. At the end of the meeting, he asked for (Artpark & Company board President Chris Brown) and me to stay, and everybody else left except the Village Board and the mayor," Osborne explained. "They said they have all these expenses related to Artpark, and they're doing all these wonderful things for us, and they need to get some money back. So, they were going to propose that we split the revenue on the upper parking lot. We're charging $5; we'd give them $2.50, we'd take $2.50. We said we would consider it.

"I sent (operations manager) Steve Bewlay back a couple weeks later to negotiate. He offered them $1.75 a car. I wasn't at the meeting, so I can't respond to what (Collesano's) reaction was. He said he would send us a letter. We have had no communication with them since then, so their plan to open their own parking lot is totally a surprise to me. It will be a surprise to Chris Brown, too."

"I told (Steve) you've got to get back to me before the first concert (Sting on June 12, through this conversation involves "Tuesday in the Park"), and he hadn't got back to me. So, it's my board's decision, and that is the end of it," Collesano said.

With the new setup, motorists now have a choice. They can, A), avoid Artpark's tollbooth by turning to the right and driving up the grass onto the plateau land (the village will have someone on site to direct traffic). Patrons can pay $4 to park in between the dog park and the nature habitat, and then walk a half mile into the venue.

Or, B), they can continue along the road, pay Artpark & Company's $5 parking fee, and substantially cut down their walk time.

Osborne laughed when he was told what the village intends to collect.

"A dollar less than what we're charging? You know what, we'll make it free," he said. "We'll just make it free in the upper parking lot."

The plateau is contracted to the Village of Lewiston for recreational purposes per an agreement with the New York Power Authority. NYPA owned the land, but deeded it over to the village for such usage.

It is estimated the plateau will hold between 800 and 1,000 vehicles.