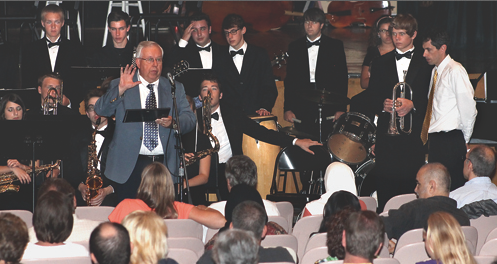 Grand Island Superintendent of Schools Robert Christmann accepts a certificate from Peter Gerace, manager of Twin Village Music, prior to a spring concert at the high school on May 22. The district was recognized as "Best Communities for Music Education" by the National Association of Music Merchants Foundation. (photo by Larry Austin)

The Grand Island Central School District's music program accepted a national award Tuesday, May 22, that notes its status as one of the "Best Communities for Music Education in America."

Last month, the district was notified it was one of 53 districts in the state rated among the Best for Music Education in the United States, according to the National Association of Music Merchants Foundation. Peter Gerace, manager of Twin Village Music, presented the district with the award prior to a spring concert at Grand Island High School.

The NAMM Foundation, a nonprofit organization devoted to advancing participation in music named GICSD as one of only 176 districts in the entire country to be recognized for its commitment to music education. Districts were judged based on their music curriculum and program, as well as public support.

In accepting the award at the concert, in front of families of music students, Superintendent of Schools Robert Christmann said, "Our music staff, as you know better than anybody, is the best staff of music teachers that any school district could put together."

He praised the music support from families. He also praised the Board of Education for its support for music programs at a time when other districts eye music departments for budget reductions in financially difficult times.

"The board continually puts music at the top of their list," Christmann said.

"We know that communities are struggling to maintain funding for many education programs and we applaud these communities that remain committed to a complete and quality education that must include music and the arts," said NAMM Foundation Executive Director Mary Luehrsen. "We urge communities to celebrate the designation as a national recognition for their commitment to children and most of all, to keep the music playing in their schools for years to come."