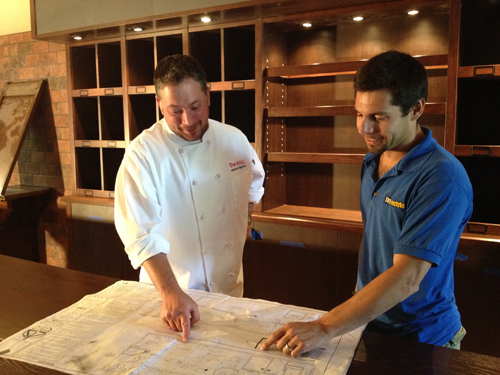 Restaurant formerly known as The Steelhead set to open mid-June

After several months of remodeling, 453 Center St. - formerly known as The Steelhead - is set to reopen as Town Hall.

Passersby have noticed several construction units moving in and out of the Village of Lewiston building. But like Willy Wonka's chocolate factory, curious observers can only peek around from the outside. Not many have actually seen the inside of the restaurant.

As was the case with the famed chocolate magnate, Tom and Carey want Town Hall to be a surprise for patrons.

"I think the look of the place is going to knock people over," he said.

This writer was invited to preview the décor.

As guests enter Town Hall, they'll notice a brand new brick wall over top of a custom-made bar and standing areas for mingling. To the south of the bar is a separate wine-tasting station and a wall-mounted fireplace.

"We're looking to make a big impact with our bar area," Tom said.

The total bar area is twice the size of what The Steelhead offered. It is separated from the rest of the restaurant by a paneled divider. On the other side, patrons will find a row of tables, and booths with high backs and a chalkboard top listing food or drink specials and unique greetings. The overall color scheme will be earth tones.

With regard to the food, Tom said onlookers "all definitely ask about steak." He said the menu features steak, but also fish and pasta (though not overtly Italian).

"There's definitely a southern influence," Tom said. "It's the kind of food we like to eat on a regular basis. It's not fancy and stuffy."

He noted the environment is upscale casual and said, "We want it to be a very warm, relaxing atmosphere."

In addition to the food and updated décor, Carey said Town Hall would pride itself on service.

"We really are committed to having a well-trained staff," she said. Servers will be knowledgeable, too, receiving wine and food service training prior to the restaurant's opening.

Passersby have noticed the Town Hall's new exterior. The "bittersweet chocolate" shade of brown will be offset by some crème and burnt orange coloring. The "Town Hall" logo will be almost gold in appearance.

The McCormicks previously worked at the Niagara Frontier Country Club. He was in the kitchen (which he calls his "happy place"), while she was manning the floor as assistant manager.