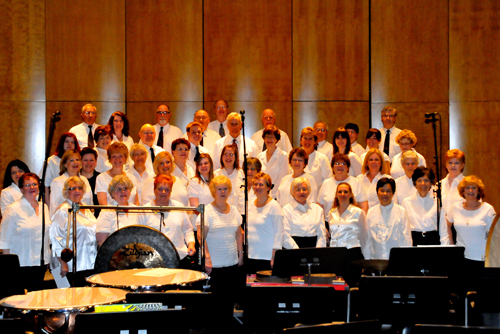 The Grand Island Community Chorus, under the direction of Carolyn Lokken will perform Sunday, May 6, at St. Stephen R.C. Church.

The Grand Island Community Chorus invites the public to its biggest concert event in the group's history.

The "Sing into Spring" concert will take place Sunday, May 6, at 7 p.m. at St. Stephen R.C. Church, 2100 Baseline Road. The Community Chorus will be joined by the Buffalo State College Philharmonia, a 65-piece orchestra composed of BSC faculty, students, professional musicians and community members; the Buffalo State Chamber Choir, all under the direction of Paul Ferington, who conducts many Buffalo Philharmonic Orchestra concerts, and Carolyn Lokken, director of the Grand Island Community Chorus.

According to Jim Watz, president of the Community Chorus, patrons of the free concert will hear Broadway show tunes from such productions as "The Sound of Music," "Phantom of the Opera," and "Carousel," songs from familiar operas, such as the "Anvil Chorus." The event will also include a sing-along.

Watz said the event is the biggest concert for the Community Chorus since the group was formed in 2006. The groups performed at BSC's Rockwell Hall on Tuesday.

"We performed Tuesday with the BSC groups, and it's very exciting to sing with these wonderfully talented young people," Watz said.

Maestro Ferington predicts an enriching evening of music, Watz added. Collection of a free will offering will support the Community Chorus scholarship fund.