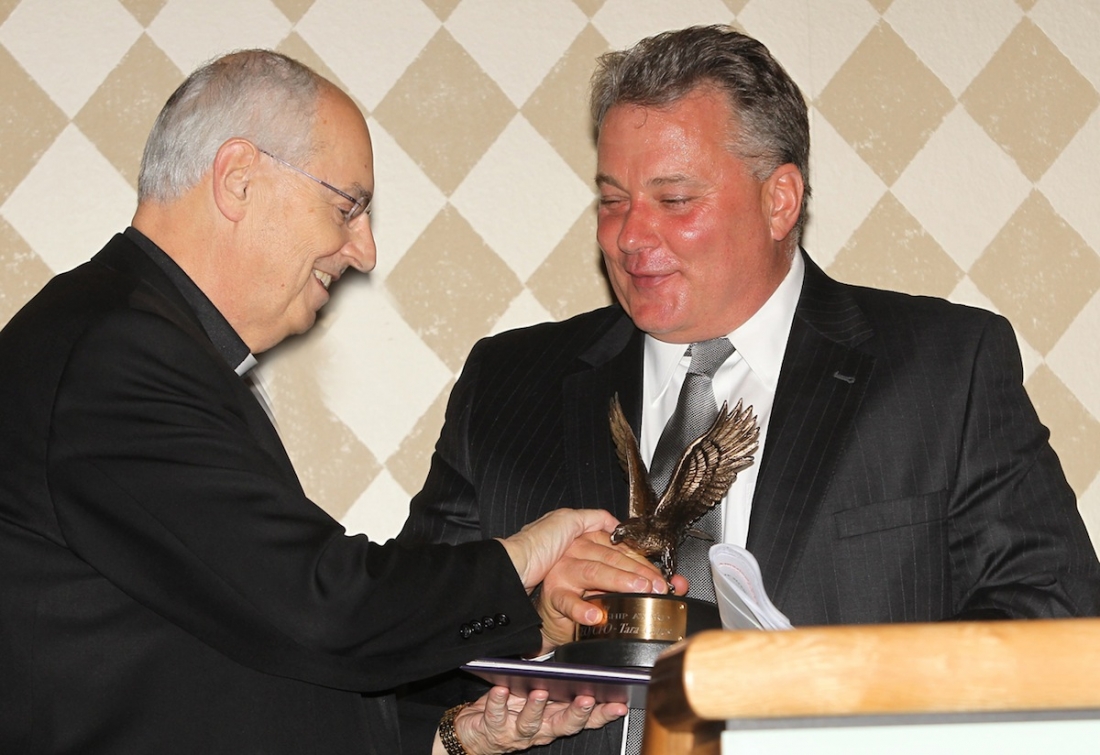 More than 260 people attended the event, which was emceed by WGRZ-TV anchor and 1986 NU graduate Maryalice Demler.

The Basil Family of Dealerships took home the award for 2012 Family Business of the Year. Since being founded by Joseph Basil Sr. in 1967, Basil's six sons have become the owner of eight separate auto dealerships. The Basil family is now credited with selling 18,000 cars annually and employing more than 500 workers.

Chiampou Travis Besaw & Kershner LLP, an accounting firm that features the surnames of three Niagara alumni in its title (Charles Chiampou, '76, Robert Travis, '77, and Kelly Besaw, '83), was recognized as this year's Distinguished Accounting Firm. (Eugene Kershner earned his undergraduate degree from Elmira College.) Since it launched in 1994, the Amherst-based firm has grown to include a management team of 11 partners and six principals who oversee more than 90 associates.

Len Crispino, recognized as the 2012 Canadian Business Leader of the Year, retired in January after spending nearly a decade leading the Ontario Chamber of Commerce. Drawing upon experience gained in positions with the Ontario government and in private business, and as a small-business owner himself, Crispino was able to develop and enhance business opportunities for the chamber's members through new and improved programming. He spearheaded the expansion of the chamber's research and advocacy capability; achieved an ISO 9001 designation; and founded the Ontario Economic Summit, an event that brings together leaders from business, labor, government, academia, and the nonprofit sector.

The Outstanding MBA Student for 2012 wasMythily Sasiharan, who works as a senior financial analyst for Green Mountain Coffee Roasters while studying for an MBA. A graduate of Ryerson Polytechnic University (Toronto), she has previously been employed by Levi Strauss & Co. and Celestica Inc. In her role at Green Mountain, Sasiharan is responsible for developing, reviewing and reporting on all financial models for site operation, working with management to find ways to reduce unit costs and participating in weekly plant performance reviews.

Finally, David Lemieux-Sarrasin, set to graduate this May with a bachelor's degree in finance and a minor in economics, earned the award for Outstanding Undergraduate Student. Lemieux-Sarrasin has achieved a 4.20 grade-point average and made the dean's list six times while at Niagara. For his academic achievements, last week he was inducted into Beta Gamma Sigma, the honor society serving business programs accredited by AACSB International. He is also a member of the university's Academic Integrity Board and participates in the Federal Reserve Challenge. For the past five summers, Lemieux-Sarrasin has coached hundreds of youngsters at tennis camps and clinics.

Dr. Shawn Daly, who took over as dean of NU's College of Business Administration two weeks ago, concluded the evening by thanking interim dean Tenpao Lee, Ph.D., for his efforts in advancing the college's initiatives since Dr. Mark Wilson retired last summer.