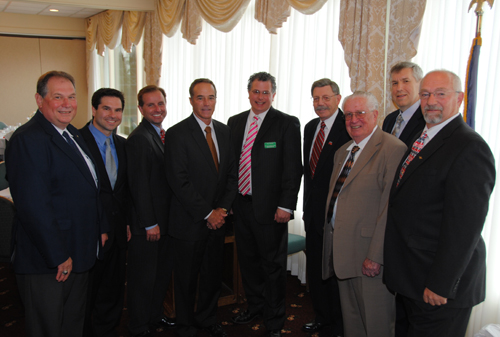 On Sunday, April 22, at its annual spring banquet, the Lewiston Town & Village Republican Committee endorsed Chris Collins for New York's 27th Congressional District. Lewiston is the first town in Niagara County to endorse in this race for Congress.

"I am grateful for the support and the faith the Republican Committee of Lewiston is placing in me," Collins said. "We share a common belief that President Obama has taken this country in the wrong direction, costing us millions of jobs. With their support, we can come together and stop the failed policies of this president and put our country on the road to a promising future. I look forward to working with them to accomplish that goal together."

This marks another significant endorsement for Collins in recent days. Late last week, the Conservative Party of New York endorsed Collins as its candidate to defeat Kathy Hochul in November. And on Tuesday, April 24, Town of Lockport Supervisor Marc R. Smith endorsed Collins.