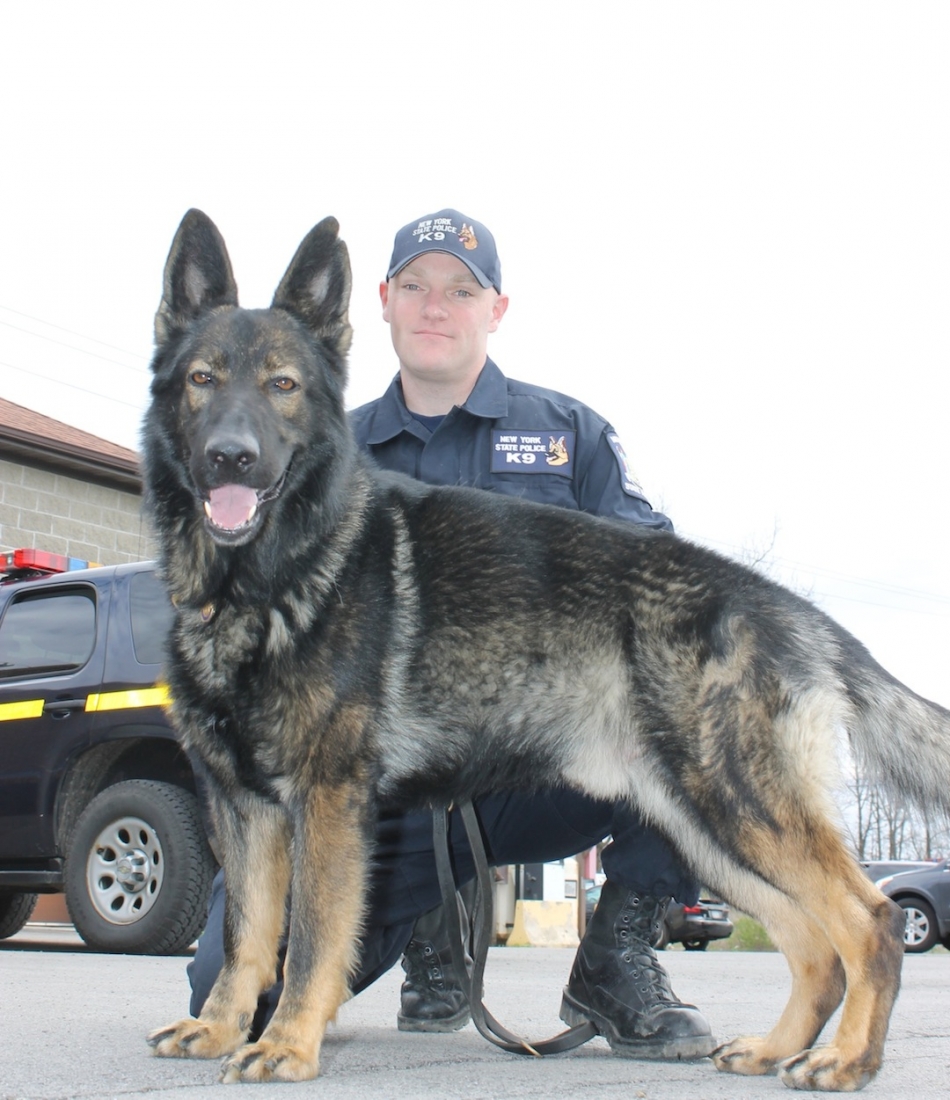 Trooper Sean Pierce is the handler for Dobber, a German shepherd named after the late Trooper Kevin Dobson. (photo by Larry Austin)

Dobber, named for fallen trooper, is on the job

Islander Kevin Dobson honored one year after his death

When Lt. Kevin Barnas of the New York State Police walks through the locker room at the Clarence State Police facility, one thing is sure to put a smile on his face: the yellow clown tie that was frequently worn by the late Trooper Kevin Dobson of Grand Island.

"He used to wear it around the station to introduce a little levity," Barnas said of Dobson, who lost his life one year ago when he was struck and killed by a car while on the I-290 during a traffic stop.

In the year since his death, Dobson's locker hasn't been touched, Barnas said.

"When I walk past it and I see that tie, it brings a little chuckle to me. I smile a little bit because I think of Kevin and the humor he used to bring all the time," Barnas said.

Dobson was remembered March 26 with a ceremony at the Clarence barracks at the one-year anniversary of his passing.

Barnas called Dobson "very comical. Kevin trained as a trooper when I was a sergeant, and I knew Kevin his entire career."

Dobson had a close resemblance to Peter Brady of the "Brady Bunch." "We used to kid him all the time about Peter Brady," Barnas said. "He took the ribbing very well and gave it right back to us. He was a very humorous guy."

"We'll never forget Kevin. There's not a day that goes by I don't think about him," Barnas said.

The remembrance ceremony was also an opportunity to introduce the public to the newest addition to the State Police canine corps and another reminder of Dobson in the form a 3-year-old German shepherd male named Dobber.

"We have just under 80 dogs in the canine unit in the State Police, and every one of them is named in honor of a fallen Trooper," said Dobber's handler trooper Sean Pierce. "It's a tradition that we've always had."

The 80-pound Dobber has completed a 21-week training program in Cooperstown, Pierce said, and his new duties will include narcotics detection, tracking of fugitives and missing persons, building search, basic obedience and handler protection. Pierce takes Dobber home to his family and his other pets after work.

Dobber understands when to be friendly and when to do his job, Pierce said.

"He knows when it's time to go to work," Pierce said.

Grand Island has lost two sons to fatal traffic accidents while they were on duty. In addition to Dobson, four years ago, an alleged drunk driver struck and killed Kevin Coffta of Grand Island's Marty's Towing as he assisted a disabled vehicle in Buffalo. The tragedies have highlighted the importance of the Move Over Law, recently expanded, which is intended to protect all responders who work in and around traffic, Barnas noted.

"I think the public is very aware of this new law and the aggressive enforcement of the law," Barnas said. "The majority of the people do understand, but there are still people not moving over as mandated."

"Historically, too, I think that your likelihood of being fatally injured as a police officer is (higher) in a traffic situation as during a vehicle and traffic stop versus getting shot at," Barnas said.

Since Dobson's death, the State Police has undertaken other ways of honoring him, Barnas said.

•Local troopers will maintain a memorial on the I-290 near where Dobson died.

•The Badge of Honor Club has placed a placard on the entrance ramp to the Colvin Boulevard ramp to the I-290.

•Fundraisers will continue for Dobson's family.

"It's about taking care of the family," Barnas said.