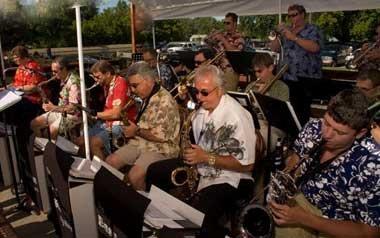 The Easy Street Big Band will appear in concert on Saturday, April 21, at 7:30 p.m. at the newly opened Ellicott Creek Playhouse, 530 Ellicott Creek Road, Town of Tonawanda. This concert will include the music of Glen Miller, Tommy Dorsey and many other "Big Band" standards.

The Easy Street Big Band, voted The "Best Jazz Big Band" at the 2006, 2007, 2008 and 2009 Buffalo Music Awards, was installed into the Buffalo Music Awards "Hall of Achievement" in 2010. The group was formed on Jan. 19, 2003, bringing together the talents of 16 area musicians, two vocalists and a director from numerous cities in Erie and Niagara counties.

While music from the "Big Band" era makes up a large portion of the band's lineup, jazz tunes and a variety of other types of music round out its repertoire. The band has performed for thousands of people at fundraisers, dances, weddings, festivals and concerts.

Hosted by the Niagara Regional Theatre Guild, tickets are $10 at the box office and can also be purchased in advance by calling 716-284-6358. Seating is limited. Call 716-284-6358 or visit www.niagaratheatre.com for directions, reservations and tickets.