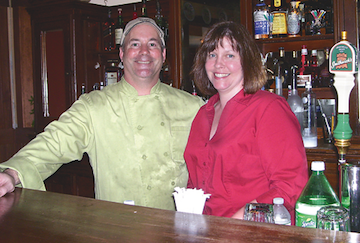 Chamber of Commerce: Benson, Dick & Jenny's, honored with Citizen of the Year awards

Business of the Year - Dick & Jenny's

Dick and Jenny Benz met in New Orleans at the Upperline Restaurant - she was a server and he was the chef. After getting married on Uncle PJ's boat on the West River, they decided to open a little dinner restaurant in uptown New Orleans. They called it Dick & Jenny's, of course.

After years of success as a locals' favorite, Dick & Jenny's was thrown a curveball in 2005: Hurricane Katrina. The restaurant was intact, but Dick and Jenny's home was in their neighbor's lot. So after evacuating to Grand Island, they decided to stay. Jenny grew up on Grand Island, so spending more time with their extended Wiles family would be great fun with their small children. Dick & Jenny's New Orleans was sold to employees and is still as busy as ever in its 12th year of operation.

After a brief hiatus from restaurant life, the Benzes started to look for a site on Grand Island. The old Del & Herb's building fit the bill. After a year-long renovation project, the landmark building was ready to begin its next chapter. Dick & Jenny's Grand Island started as a coffee house and pastry shop and has since added breakfast, lunch and dinner. The hand-painted plates that line the walls of the restaurant were all created by Dick for supporters. Many familiar Island names grace those plates and the walls of 1270 Baseline Road.

Dick Benz graduated from the Culinary Institute of America in Hyde Park, N.Y., and UCLA. After growing up in the bustle of Los Angeles, and working in the heat of New Orleans, he is enjoying life in Western New York. Jenny attended Grand Island schools through eighth grade before going on to Nardin Academy and then the University of Notre Dame. After living in the southeast, she is enjoying her return to her hometown.

Island life for Dick and Jenny has begun with a big barn, a farmhouse and lots of projects. Horses, goats and chickens have kept their three children entertained. Big gardens help keep the restaurant well supplied in fresh tomatoes, asparagus and herbs. Dick keeps planting grapevines, so who knows what will come next.

These citizens, organizations and businesses will be recognized at the Citizen of the Year awards ceremony on Thursday, April 26, at the Holiday Inn Grand Island.