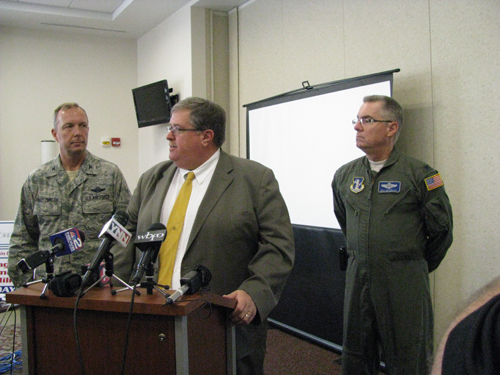 About 85 representatives of the community who have a vested interest in the survival of the Niagara Falls Air Reserve Station met at the base for a breakfast update Monday.

The breakfast featured a report by Steve Hyjek of Hyjek & Fix, Washington, D.C., lobbyist for the Niagara Military Affairs Council.

After the event, a press conference was led by NIMAC Vice Chairman John Cooper and base commanders Col. Allan L. Swartzmiller and Col. James McCready.

Proposed budget cuts in Washington could end the mission of the 107th, the Air National Guard unit at the base, affecting approximately 850 jobs.

McCready, 107th commander, said although waiting to hear their mission's fate is a difficult time for his wing's members, they haven't stopped working and performing. They are open to a suggested change in mission, just as they were in 1994 when they converted from fighters to refuelers, and in 2005, when they became partners with the 914th in flying C-130s.

"If it means us staying operational, we're all for it," he said.

Swartzmiller, commander of the 914th Air Force Reserve wing and installation commander, said it would be a sad day for the base if the 107th left. "We've learned to rely on each other to get the mission done," he said.

He noted that an option for the base's future could be becoming a federal campus. A decision on placing about 75 members of the U.S. Customs and Border Patrol at the base is expected out of Washington soon, he said.

Cooper said the base works as a team with local businesses such as Calspan and the Niagara Falls International Airport. Without it, he said, "It would be very difficult for NFTA to operate the airport."

He noted Hyjek will continue to lobby on NIMAC's behalf as he has in the past, providing "information we would never get on our own" and helping obtain funding for new buildings at the base.

Cooper urged community members interested in assisting the base to join NIMAC by going online at www.nimac.org.

County Legislator Dave Godfrey, R-Wilson, who also attended the breakfast, said the county is looking at other ways to support the base, as well. Niagara County Community College has been contacted about developing courses to give base personnel new skills, which could help them with a new mission or enable them to stay employed here if the wing is disbanded. Also being discussed is locating a countywide emergency dispatch backup center at the base, a vital link in case of disaster.