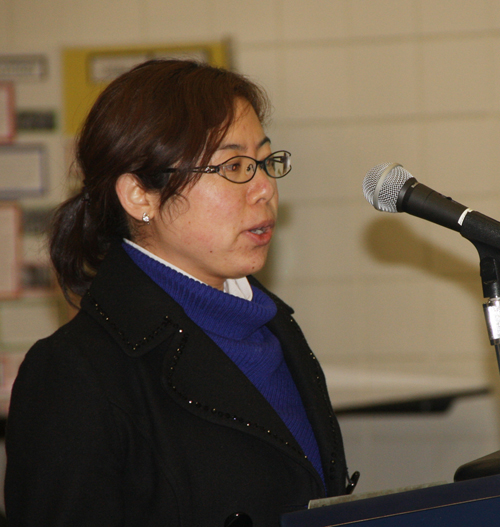 Visiting instructor Wang Ying, from Tianjin No. 2 School in China, will teach Chinese at Lew-Port next year.

Story and photos by Janet Schultz

Tuesday's Lewiston-Porter Board of Education meeting featured both serious news as well as some pleasantries.

Starting first with fiscal realities, members and attendees heard more of how Lew-Port could be faring in the face of the tax levy constraints affecting Lew-Port and districts statewide.

Superintendent Chris Roser gave a presentation on the tax levy threshold. Roser explained this threshold is based on a formula provided by the state of New York in order to give school districts a cap on the tax levy assessed to the district taxpayers. The formula takes the cap above the 2 percent cap that the state put on districts. At this point, based on that formula, Lew-Port may assess a tax levy from 0 percent to 3.5 percent in a regular budget vote; anything above that would have to go to a supermajority vote of 60 percent of the public vote to approve.

"A number of things in our budget allowed us to have a 0 percent tax levy for the past four years," said Superintendent Christopher Roser. "Now we are in dire straits. A zero percent tax levy is not in our thought process this year. The 3.5 percent doesn't get us to where we need to be; but we haven't cut anything yet. "

In addition to maintaining a 0 percent tax levy, Lew-Port hasn't had any layoffs of staff in three years, but Roser said that may not be the case this year. Plus, there will have to be cuts in requests from the administration.

The district's tax levy threshold number of 3.5 percent had to be filed with the state comptroller's office on Feb. 29, which Lew-Port did with the approval of the board.

"I don't think we'll have to cut a lot," said board President Jodee Riordan.

In coming months, the board has several work sessions planned before adopting and presenting a final budget to the district. The next session is scheduled for March 6.

•The BOE tabled action on a retirement incentive memorandum of agreement with the Lewiston-Porter United Teachers until they can discuss it further.

•The board approved the resignation of Middle School Principal Karen Cuddy-Miller. She has accepted a position as director of curriculum instruction with the Grand Island School system.

•High School Principal Paul Casseri introduced Wang Ying from Tianjin No. 2 School in China. Ying will teach Chinese to students of all levels at Lew-Port. She is working with the district as part of the Confucius Institute and will be with Lew-Port until January 2013.

•The board approved co- and extra-curricular appointments for 2012-13 school year for coaches in soccer, swimming, volleyball, cross country, tennis, golf and the musical stage director; while tabling all coaching positions for football until the March meeting. According to Riordan, the holding of football was a procedural issue.

Moving on to more pleasant news from the session, the board declared March as Music in School Month. They learned more of Lew-Port's Music in Action Program, which connects students to school through music, whether it's performing, writing or working in the business in another way. Students in the program have had the opportunity to record CDs, visit recording studios, Entercom Radio and the Rock and Roll Hall of Fame, and they play each year at Lew-Port's Springfest. In addition visiting artists have come in and worked with students on various aspects of the industry. Faculty member John Evert advises the program.

Performing at the BOE meeting were The Brass Monkeez, featuring Tyler Midgley, Evan Waterstrat and Steve Fleck. For more on this program and to hear some of the music written and performed by the students, visit www.lew-port.com.

Also at the session members of the L-P music faculty were recognized for their contributions to the entire music program.

And board members heard about middle school students who were given a history project to work on based on the topic of "Revolution, Reaction and Reform." Unique projects on display at the session included "The Industrial Revolution" by Justin Weinfurtner and Michael Allender; "Pearl Harbor" by Keith Powers and Amanda Hall; "Regulations in Horseracing" by Cheyene Vanderbosch and one on Winchester rifles. These projects will go to a Western New York regional competition and winners from that move on to states and perhaps nationals.