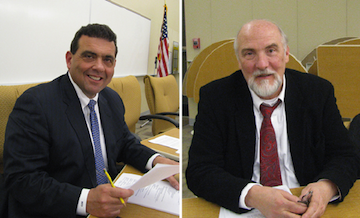 Niagara-Wheatfield Superintendent Carl Militello, beset by angry union members, budget shortfalls and a disgruntled school board, on Wednesday retired from the school district.

Militello and the board went into executive session for nearly an hour. When the board returned, Militello didn't.

The board voted to accept Militello's resignation and approved a separation agreement with him.

Next the board approved Kerin Dumphrey, district business manager/clerk, as acting superintendent, and Timothy Hilker, treasurer, as interim district clerk.

Board members declined comment on the matter. Board President Steven Sabo read a written statement:

"The Board of Education tonight was informed of and accepted the notice of retirement of Superintendent Carl Militello. The board thanks Mr. Militello for his service to the district and his commitment to the education of the children of the district. Mr. Militello's retirement will be effective Feb. 2, 2012.

"The Board of Education understands that it has a great deal of work to do in the upcoming months, including development and proposal of a budget in what are very difficult financial times. We look forward to working collaboratively with the community and the district staff in developing that budget and in furthering the overall education of all the students in the district.

"Mr. Kerin Dumphrey shall be serving the district as acting superintendent in the near term while the board explores its options for finding a new superintendent of schools.

"The board again thanks Mr. Militello for his many years of dedicated service and wishes him the best in all future endeavors."

Militello, a native of Angola, was hired as the N-W superintendent in June of 2008, with a start date of Aug. 1. Then 51, he returned to Western New York from a position as superintendent of the Carthage Central School District near Watertown.

Dumphrey has been employed by N-W for the past 18 years. He also didn't comment except to say that he had been approached about temporarily filling Militello's position on Wednesday and that he thought the day's focus should be on all the good things Militello had done for the district and its students.