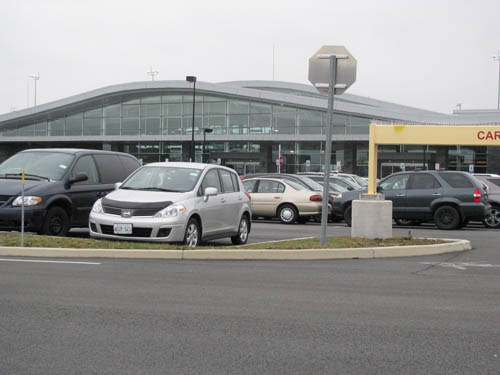 Parking lots near the new terminal fill up quickly these days. (photo by Susan Mikula Campbell)

Beginning April 1, parking fees at Niagara Falls International Airport will double to a maximum daily rate of $10 and a weekly rate of $50.

Henry Sloma, NFTA Board of Commissioners chairman, said Wednesday that the additional money to be raised by the parking increase "stays within our airport."

He noted that there have been improvements made and additional property purchased for the three parking lots now operated by NFTA at the airport, ongoing improvements are expected and that a master plan for the future development of the airport is in the works. NFTA is currently carrying the cost, because the Seneca casino revenues due to the airport are still tied up, he said.

The rate adjustment is estimated to increase revenues by approximately $837,000 during the fiscal year starting April 1, which will partially offset operating deficits.

Sloma said he didn't expect the increase in rates to affect the continued growth of the airport, where two years ago, the airport parking lot was routinely empty. The addition of a new terminal and low fare airlines with destinations to warmer weather in Myrtle Beach, S.C., and Florida sites resulted in the need for two more parking areas.

Even with the increase in parking fees, he said, "It's cheaper than the lowest rate at the Buffalo airport. They're not going to park any cheaper anywhere else. We don't anticipate any problems."

The increase in airport parking rates could mean great news for the Town of Niagara, according to Town Supervisor Steve Richards.

"The NFTA doubling the parking fees kind of reminds me of the New York state cigarette taxes. The more the state raises the cigarette tax, the more money the Native Americans make, but this time it will be the Town of Niagara receiving the cash," he said.

He explained that the town wants to redevelop the former U.S. Army Base on Porter Road for aviation-related industry, because of the presence of a large hanger on the property.

"However, the NFTA has been less than cooperative on granting us access to the runways, which makes this property worthless for any kind of aviation business; a hanger is of no use to anyone if you can't get an airplane to it," he said.

The town has been looking at other possible uses for the property as a backup plan, most recently, using some or all of the 20 acres for airport parking.

"I'm being told by a national parking franchise that the old base could accommodate 2,400 cars easily, and at $3 per car, the town could make millions, enough money to repair the damage being done by the storm water run off from the airport, which the NFTA has turned a blind eye to, and money left over to cut taxes," Richards said.

Originally, parking was free at Niagara Falls International Airport. Rates of $5 daily and $25 weekly were begun in January 2011.

The lots are serviced by Standard Parking under its current agreement with the Buffalo Niagara International Airport.

A shuttle service brings passengers to the Niagara Falls International Airport terminal from Lot 3, which is across Niagara Falls Boulevard from the airport. Currently, "meet and greet" patrons can park for free for up to two hours in the lot adjacent to the old terminal building.