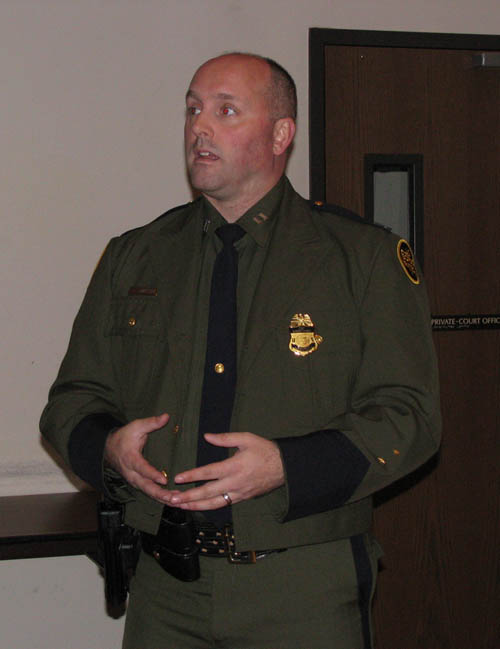 Americans who live, work or play along the border are being asked to keep an eye out for suspicious activity.

Probably three-fourths of reports of suspicious activity along the border come from the public, Griffiths said. Asking citizens to report is one of the big factors in Homeland Security's new strategy.

"If you do see something out of the ordinary or suspicious, do call us," he said.

In addition to information from the public, the Border Patrol is focusing on integration with local law enforcement and rapid deployment.

Their Niagara Falls office, currently located near Niagara University, has 63 officers covering the area from North Tonawanda through Somerset.

If someone calls in a report, "we'll get someone out there right away," Griffiths said.

Asked if a citizen could just call 911 with an emergency report, Griffiths said that if they called 911 to either ask to be connected to the Border Patrol number or give the information and ask it be relayed to Border Patrol by radio.

Councilman Gil Doucet asked about plans to relocate the Border Patrol station to the Niagara Falls Air Reserve Station. Griffiths said the biggest problem with that is getting their own security gate. The agency also is looking at the Lockport area, but most of the illegal entries to the country are in the Niagara Falls area, because the river is easier to cross than the lake.

In other matters at Monday's meeting:

•Supervisor Bob Cliffe read a letter he had sent to Time Warner Cable regarding its dispute with the MSG network.

"Many Town of Wheatfield residents who subscribe to your cable television network did so primarily to view Buffalo Sabres games and other sporting events that had been available on the MSG network. Failure to provide the programming that was used as an inducement for residents to subscribe to your service greatly diminishes the value of your service," Cliffe wrote.

As a result, he added, the town was requesting, on behalf of its residents that "you reduce the monthly rate charged for your cable service, at least until the programming promised to town residents, particularly Buffalo Sabres hockey, is restored."

•Recreation Director Ed Sturgeon reported that the computer classes being offered to senior citizens during the day at the Youth Center are all filled. At least two more classes will be formed. Dates and times will be announced soon.

•The board approved amending its recycling bin contract with Cascade Engineering to include 50 64-gallon carts for use for recycling at town events.

•The board scheduled a public hearing for 7:15 p.m. Feb. 27, its second meeting in February, on the possibility of changing its street lighting policy.

Current policy places streetlights at major intersections, major turns and on a cul de sac. Cliffe said there are some areas in the town where distance between lights can be about a mile. The town pays Niagara Mohawk $250 per year for every light installed.