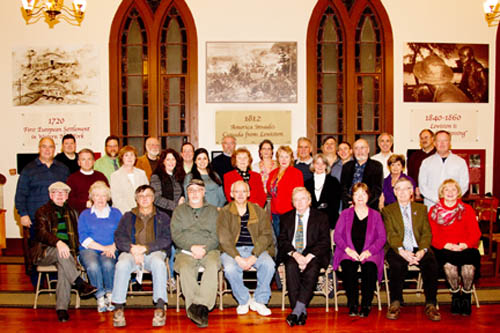 More than 30 volunteer organizers met at the Lewiston Museum recently to discuss plans for the forthcoming Battle of Queenston Heights Bicentennial Commemoration and Re-enactment, which will take place Oct. 12 to 14 at Academy Park in Lewiston and in Queenston, Ontario. The event is a bi-national effort and will attract re-enactors and visitors from all over the U.S. and Canada.

A major cannon bombardment of Canada will take place in Lewiston on Friday evening, Oct. 12, following an "Education Day" where more than 1,000 students will be visiting for field trip activities. The event will be free and open to the public. No local tax dollars will be used, and sponsors include the Niagara Falls Bridge Commission, the Town of Lewiston (Greenway fund), Niagara County, the Niagara Falls National Heritage Area Commission, the Village of Lewiston and private sponsors.

The Battle of Queenston Heights was the first major battle of the War of 1812, when half of the American army was sent to Lewiston to invade Canada on Oct. 13, 1812. The Americans gained a temporary foothold on the Canadian side and killed British Gen. Isaac Brock, but were later pushed back and lost in a humiliating defeat. (photo by Bill Carpenter)