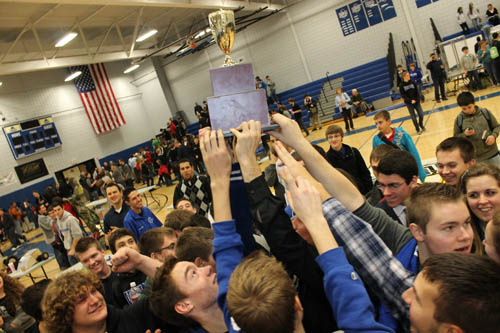 Grand Island High School completed a three-peat of the Tech Wars competition Wednesday, winning for the third year in a row in the battle of school technology programs held at Niagara County Community College.

GIHS had 47 points, 30 points clear of Cleveland Hill, which finished second with 17 points. In 15 events contested Grand Island won five and had at least one finisher in the top three in 11 events. (See Page 10 for a complete list of winners.)

Technology teacher Carl Koppmann said GIHS sent 45 students to the competition, with another 40 Connor Middle School students taking part in the middle school portion of the event. The competition was broken into high school and middle school categories this year to expand participation and in hopes more districts would be willing to support tech programs that teach mathematics and science through the medium of engineering, Koppmann said.

"The whole idea is to get the trophy out to more districts so that the programs grow," he said.

"Life skills, career skills, teamwork - this is math and science integrated into real world scenarios with friendly competition," Koppmann said of Tech Wars. "Plus you get to see so many different designs in one place. Where else are you going to see 1,000 students checking out their designs?"

Jon Shelley hoped the GI program can continue its dynasty into a fourth year at Tech Wars where other schools have faltered.

"It feels pretty good," Shelley said of the win. "But we'll see what happens next year, because they always fall after the third year." Lockport and Newfane had three-peated, Shelley said, but weren't able to continue the winning streak.

Another win streak for GI came in the bridge building event, where Brendon Lutnick, Nathalie Winder and Robert Rennells built a wooden bridge out of 3/8-by-3/8 inch wood pieces that held 995 pounds of weight before breaking. The trio of bridge builders won both in total weight held and highest efficiency. The victory in bridge efficiency came due to the bridge, at just 5.5 pounds, was holding 180 times its weight.

GI has won the bridge title three years in a row. Does living on an Island give GIHS an advantage?

"Maybe," Lutnick said. "It actually kind of looked like the Grand Island Bridge a little bit because we had two arches."

Lutnick said the bridge, built to specifications of a maximum 18 inches tall and 60 inches wide, broke when the team got a little ambitious and put a 35-pound weight on near the end. They felt confident the bridge, which took two and a half months to build, would hold half a ton.

"You have to be conservative and very defensive," he said of his strategy. The GI side had an advantage playing at Viking Arena, GI's home rink for practicing hockey bot games, that even has its own advertising on the boards.

"We had more practice with the rink. I don't think any other schools have one yet," DeRubes said. "There are some that are trying to build a rink, though."

"We're slowly developing," DeRubes said of the GI tech program. "We're trying to expand our tech department so it's great to get another win, because then our school might put a little more money in it."

Shelley said some students like DeRubes were preparing 13 and 14 weeks for the competition. Throughout Tech Wars, he said, sportsmanship is stressed.

"If another team needed something, we've already told our kids to help them out. Give them a tool, get them into the competition," Shelley said.

Noah Raymond, co-coordinator of Tech Wars, said the competition, now in its 12th year, is teaching kids how to design and problem-solve much as they will in the real world with budgeting and collaboration.

"You'll find that one group will have a battery that dies and you'll find another group that will run right over and let them borrow a battery," Raymond said. "It's pretty neat to watch."

Friendly competition between schools inspires an increased effort. "It's fun, hands-on," Winder said of the work in preparing for the competition. "I think it does make you work harder though."

Josh Miller played basketball for the Vikings on Tuesday night and returned to the hardwood at NCCC to compete in vex robotics with teammate Robin Mangat.

"I get the same thrill of winning; I get upset if I'm losing. It's the same type of thrill," Miller said in comparing hoops and robotics.

FitzGerald said a strong, sharp wedge and a low-to-the-ground bot, called The Batmobile, were keys to their victory. That and the cool logo.

"It has the Batman symbol," Grenke said of the sumo bot.

Another key to three-peating as champions at Tech Wars, according to FitzGerald: "I think our teachers, because our teachers care a lot about us. Like Mr. Koppmann, he's like 10 teachers in one. He shows a great passion for all of it, and he wants us to do good."

"They spend a lot of time after school with us," Grenke said. "I think Mr. Shelley and Mr. Koppmann the past week were probably at the school until 9 or 10."

"I think we've got a great tech program. But not only is our program great, the teachers that are here are great. They really help us understand and help us to do our projects and do what we want," Miller said.

That there is never a dull moment in tech makes the program worthwhile for even those students who don't plan to make a life in engineering, Mangat said in recommending the GI tech program.

"It doesn't matter if you're not going to go into any technical career in the future," he said. "I think you should definitely do it even just as a hobby maybe, just for fun."

"We have a great group of guys that I work with and they make it a lot of fun, too," Shelley said. "We're learning, but then at the same time having a lot of fun, and I think the students at Grand Island enjoy and pick up on that."